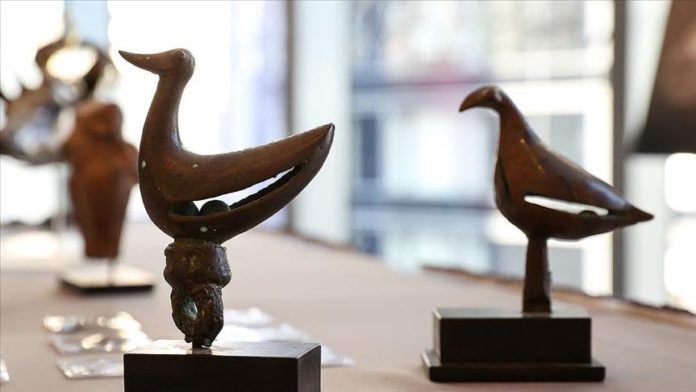 Twenty-eight Turkish cultural artifacts confiscated in the US were handed over Friday to Turkiye’s Consulate General in New York.

The seized historical artifacts, including 16 which were in the antique art collection of US billionaire Michael Steinhardt, are returning to Turkiye.

During the handover ceremony at the Turkevi Center, historical artifacts were received by the Turkish Consul General in New York Reyhan Ozgur from the US Department of Homeland Security and the Manhattan District Attorney’s Office.

Ozgur said the process of returning the 28 artifacts smuggled from Turkiye was completed with the work of the country’s Culture and Tourism Ministry.

Turkiye has recovered more than 8,000 historical artifacts that were smuggled in the last 20 years, he said, and added that the artifacts would be exhibited in Turkish museums.

Among recovered items are 12 coins, a 6,000-year-old Kilia idol, a mother goddess idol from the neolithic period and a Stag’s Head Rhyton.

Turkiye announced last month that it recovered 3,480 cultural assets in 2021 thanks to the efforts of the country’s anti-smuggling authorities.

The process for recovering artifacts involves multiple state agencies, including law enforcement and judicial authorities, as well as diplomatic efforts and court cases in the countries where the artifacts are found.

Taking cultural assets abroad without official permission has been illegal since the Republic of Turkiye’s founding and even earlier during the Ottoman Empire.

Unlicensed excavation is illegal, as is failing to report any uncovered artifacts to authorities, under current legislation.