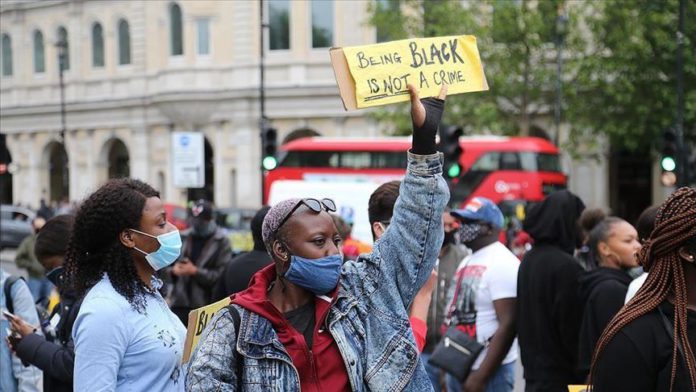 Tens of thousands of Brits took part in Black Lives Matter protests Saturday across the UK, with brief clashes in central London.

Demonstrations took place despite government appeals to respect restrictions relating because of the ongoing COVID-19 pandemic.

Shortly after 6 p.m. local time (1700GMT), protests briefly descended into clashes in Whitehall, near the prime minister’s residence at 10 Downing Street, when the weather took a turn for the worse.

Some demonstrators threw bottles and objects at police and protestors lit flares. Officers on horseback and in riot gear mounted a charge to push the crowds back. A police officer was seen lying on the ground and his horse bolting.

Sky News reported social media footage showed the officer who fell from his horse was unseated after hitting a traffic light.

Except for the brief clashes, the nationwide protests were peaceful. Many demonstrators wore masks and gloves and attempted social distancing.

Protests took place in London, the Welsh capital of Cardiff, and northern cities of Manchester, Sheffield, Newcastle, and Leicester, among others.

The wave of protests marks the second weekend of solidarity with George Floyd, an black American killed by US police.

Protests have spread from the US and have highlighted systemic racism faced by blacks and minorities in countries around the world, including the UK.

Despite the rainy weather, huge crowds gathered in Parliament Square in central London. The Daily Mail reported there were 15,000 protestors in London and 15,000 in Manchester.

Thousands took a knee outside the US Embassy as demonstrations made its way around London.

Slogans on placards included, “There is a virus greater than Covid-19 and it’s called racism.”

Local media quoted Bobbi, 26, who said: “We’re literally living in the history books, we’re going to be teaching our future children about this and I want to say I was here to support that.”

“We can no longer sit back and remain silent on these senseless, unlawful killings and sly racism on another human being – based on what? Only their skin color,” he said in a speech.

British artist Banksy posted a new painting on Instagram of a candle from a vigil burning the US flag. “People of colour are being failed by the system,” he wrote in the caption, which had almost 2 million likes.

Health Secretary Matt Hancock said Friday at a daily coronavirus press briefing: “Like so many I am appalled by the death of George Floyd and I understand why people are deeply upset but we are still facing a health crisis and coronavirus remains a real threat.

“The reason that it is vital that people stick to the rules this weekend is to protect themselves and their family from this horrific disease.

“So please for the safety of your loved ones do not attend large gatherings including demonstrations of more than six people.”

Home Secretary Priti Patel was more direct Saturday while speaking to Sky News “To those who want to protest, please don’t,” Patel said.

Shaun Bailey, the Conservative candidate for next year’s delayed London mayoral elections contradicted his party’s line and backed the protests. Bailey is black.

“If we do not allow this tension to be answered, if it is bottled up, then it will just spill out into the summer and be very tough for the police,” he told Sky News.

“So in some sense, they absolutely need to go ahead, but it must be done with social distancing and must be done as safely as possible.

“This is a very, very tough situation for us all, but there are a few things we all have to take into account. If this very real tension and fear is not allowed a pressure valve to release, we’ll be storing up trouble for summer,” he said.

London Mayor Sadiq Khan, who is of South Asian descent and running for re-election, tweeted: “Londoners are right to be angry about the systemic racism black Londoners face. Many of you feel compelled to protest today and tomorrow. If you are, please do so peacefully, lawfully & safely – we must protect each other from COVID19. #BlackLivesMatter”

The US has seen protests for two weeks since a video went viral showing Floyd being pinned down by Derek Chauvin, a white police officer in Minneapolis, Minnesota, as he was being arrested.

Chauvin knelt on his neck for nearly nine minutes. Shortly after, Floyd appeared to lose consciousness, but Chauvin maintained his position on the victim. He died shortly after being taken to a hospital. Floyd was killed by “asphyxiation from sustained pressure,” an independent autopsy found.

His last words were “I can’t breathe,” which became a slogan for nationwide and global protests.