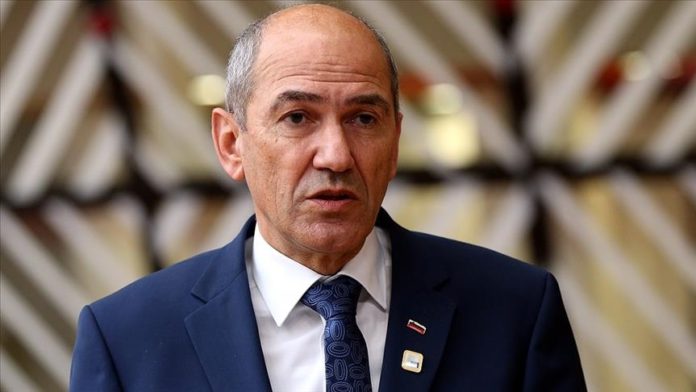 Slovenia’s prime minister, who on July 1 took over the rotating presidency of the European Union from Portugal, on Tuesday explained his country’s priorities for the next six months.

Addressing the European Parliament in Strasbourg, France, Janez Jansa spoke about Slovenia’s program of activities during its six-month EU presidency.

Jansa said during these six months it is time for the EU to work from a more strategic and long-term perspective.

“For the second half of the year I can say that we are facing some of the challenges and priorities that stem from the situation in which the European Union finds itself right now,” he said.

“At the same time, we believe that these challenges will contribute to the survival and development of the Union.”

He added: “First of all, we have to focus on resilience, on recovery of the EU, and on establishing a strategic autonomy of the Union.”

“We will be recovering at the same time as we will be implementing the digital and green transition,” he said.

“The next priority is the union of the European way of life of the rule of law and of equal criteria and measures for all countries and citizens in member states of the European Union,” he explained.

“We are also talking about the union of balanced rights and responsibilities, the union where we provide a high level of protection of human rights, fundamental freedoms, including the freedom of expression.”

“Then we have to focus on creating a credible and secure European union A union that is capable of providing security, not only within its territory but within its neighborhood as well,” he added.

On foreign policy, Jansa said that they will focus on the relationship between the EU and the Western Balkans. He added that this October Slovenia will host an EU- Western Balkan countries summit.

Noting some difficulties in EU enlargement, he said they aim to revive the EU perspective for the Western Balkan countries.

“If we don’t take a step forward into the Western Balkans, then these steps will be taken by somebody else by somebody who has different interests and values,” he added.

Saying that it is also necessary to define the long-term relations between Turkey and Russia and the EU, Jansa added: “Turkey is becoming one of the most important actors in the Mediterranean.”

A member of the EU since 2014, Slovenia will hold the EU presidency through Dec. 31.