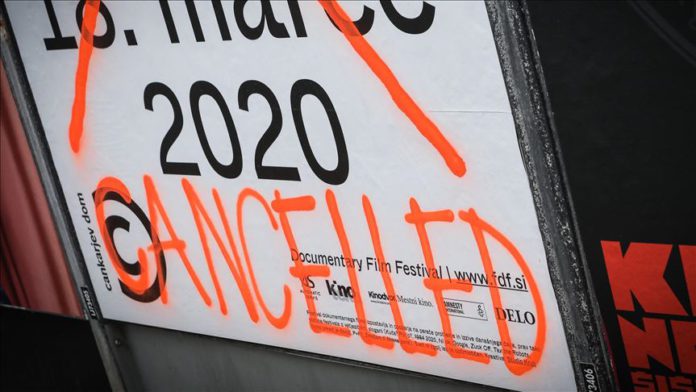 They gathered at several locations in Ljubljana, opposing a ban on movements which was extended by the government to curb the spread of COVID-19.

The demonstrators aimed flares at riot police and threw granite pavement cubes at them. They also caused damage to buildings and other infrastructure.

Police attempted to bring the riot under control, using a water cannon for the first time since 2012, when angry demonstrators attempted to storm parliament demanding that the government step down over alleged corruption.

A police helicopter circled over the city center the whole time.

Prime Minister Janez Jansa expressed support for the police on social media, saying peaceful protests when there is no pandemic is a constitutional right but riots and physical violence against the police are criminal acts.

The Slovenian government has banned movement between municipalities and public gatherings of more than six people. The measure will last at least another week, according to the latest decision.

Elementary school students will not return to classes after a two-week vacation that was supposed to end Monday but will instead shift to distance learning, which has been valid for high school students for a week.

Kindergartens will be open only to those who perform critical jobs.

The government has decided to allow the reopening of some businesses including specialized shops selling baby items, technical goods stores and furniture shops.

They will have to observe additional security measures such as limiting customers to one per 30 square meters.

Shopping malls will have to have separate entrances and exits with disinfectants at both ends.