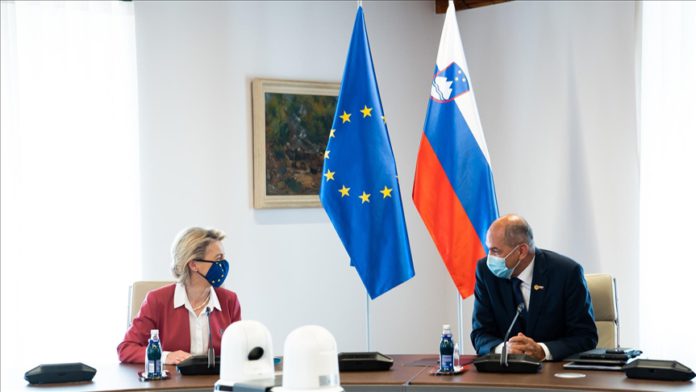 Slovenia is taking over the Presidency of the Council of the European Union from Portugal at a crucial time for the EU, European Commission President Ursula von der Leyen said Thursday.

“Slovenia is taking the helm of Europe’s leadership at a turning point for our Union,” von der Leyen said in a joint press conference with Slovenian Prime Minister Janez Jansa in Slovenia.

Highlighting the importance of working together to steer this recovery and make sure it works smooth and fast on the ground, she said: “I count on the presidency’s support to approve as many national recovery and resilience plans as possible before the summer break because this is crucial so that the money starts flowing now as soon as possible.”

“With the Next Generation EU [fund], we have €800 billion in today’s prices worth of investment,” she said.

She also touched on the EU enlargement process.

“We are also committed to making progress in the EU enlargement process by formally opening the accession negotiations with Albania and North Macedonia.”

She also spoke on the new pact on migration and asylum, saying it is “a key initiative” and “we should continue moving forward.”

The European Parliament and the Council of the EU representing member states reached a political deal on transforming and boosting the competencies of the already existing European Asylum Support Office.

Meanwhile, for his part, Jansa said the pandemic had a negative impact on many countries and that the EU was able to respond quickly to the crisis.

Joining the EU in 2014, Slovenia will hold the EU presidency until Dec. 31.