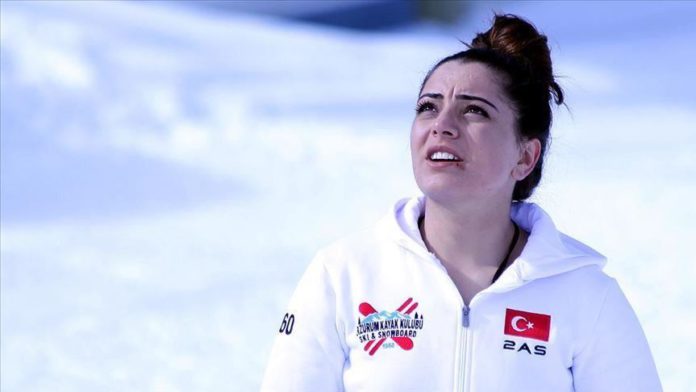 Slovenian police on Thursday awarded a Turkish alpine skier with a medal for her heroic acts to save a Slovenian minor’s life in February.

Slovenian Ambassador in Ankara, Primoz Seligo gave “The medal of the Slovenian police for selflessness” to 20-year-old athlete Sila Kara in a ceremony held in the embassy in the Turkish capital.

Kara saved the life of a 12-year-old boy in Slovenia’s Krvavec Ski Resort during a warm up as she did not let him fall off ski chairlift.

“Our precious athlete Sila Kara saved a child’s life in an international skiing competition in heroic and bravery ways,” Kasapoglu said and paid tribute to Kara for her courage and self-sacrificing as she did it for humanity, love, mercy and compassion.

Kasapoglu said that she also contributed to the spirit of sports by saving a life as “sports means fraternity and love and it means to save life when needed.”

Meanwhile Kara said that athletes have to do their best in sports but should do the same in the every platform for humanity as well.

She thanked Slovenia for this honor and sent her love to the Slovenian people.

Kara added that she hopes whole world will have efforts to keep people alive and establish social peace.

The boy, who was alongside Kara on a chairlift, lost his balance. He managed to grab Kara’s ski swaps in the last-ditch effort to prevent his fall. Kara then held the boy for 15 minutes as he was dangling in the air and then he was eventually rescued by the ski patrol.

The statement said that Kara was honored with a medal by Krvavec police for her bravery. Kara was among the competitors in the Krvavec Giant Slalom held on Feb. 12-13.

Speaking about the incident, Kara previously said that the boy panicked once he fell off the chairlift.

“I threw my ski poles and took off my gloves with my mouth. When I took them off, he cried and shouted ‘Please hold me with both hands’,” Kara said, adding that she held the boy with her both hands for approximately 15 minutes.

She said the ski patrols and ski resort staff arrived at the scene and she let the boy fall on the safety net.

“I went down to check the boy and they [patrols and staff] told me he was in good condition and didn’t have any problem,” Kara remarked.

“[After saving the boy] Slovenian news channels said on TV ‘Find this hero girl'[…] Slovenian police chief and officers gave me an appreciation medal at the airport,” she noted.

Kara said it was her duty to save a human life and she is very happy to save him.

Germany rejects US proposal for Russia’s return to G7