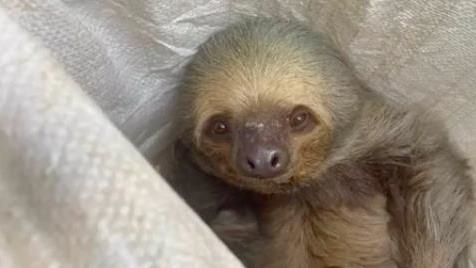 A sloth that was trapped between power lines in Colombia’s Antioquia province was rescued earlier this week by a worker from public services holding company Empresas Publicas de Medellin (EPM).

A video circulating online shows how 38-year-old Victor Hugo Lopez climbed a utility pole and offered a helping hand to the endangered animal, which appeared to be afraid and kept moving further away at first.

Lopez then reached for a broomstick to catch it and the sloth finally grabbed hold of it. After moving the sloth away from the cable, Lopez hugged it and descended the power pole.

​​”It is exciting to see this video in which Víctor Lopez rescues a sloth in Taraza, a species that is on the verge of extinction in Colombia. The sloth is the slowest animal in the world,” wrote Mabel Lopez, EPM’s communications vice president, on her Twitter account.

The rescue was carried out Monday afternoon following various calls from worried residents in the rural town of Taraza, who warned that the sloth had been hanging there since the morning.

Hours after the rescue, the animal was returned to its natural habitat.

“Welcome to freedom, little sloth. Climb the tree. Don’t go falling, let’s go up,” Lopez is heard saying in the video, which showed the moment when the animal climbed back up the tree, where he was left.