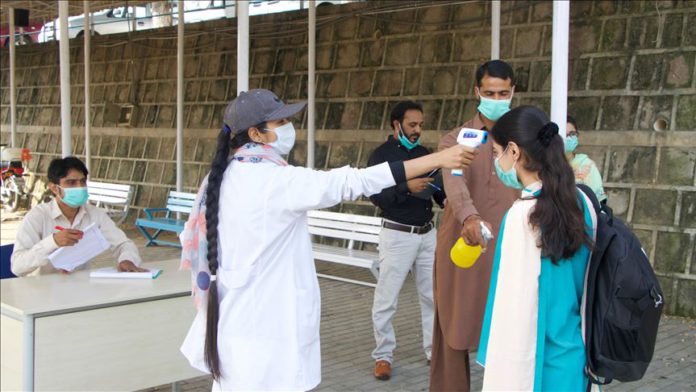 The latest study by Pakistan’s leading blood diseases institute suggests there is a slim chance of a second wave of the novel coronavirus here, further strengthening the government’s policy of reopening of businesses.

The cross-sectional study conducted from May to July at the National Institute of Blood Diseases (NIBD) Karachi, has been published by the Oxford University Press’s Journal of Public Health.

It included adult male and female participants, who ranged in age from 18 to 60.

The study conducted to assess antibodies levels in diverse a group of residents to comprehend prevalence in the community, revealed that 36% of the workforce of Karachi, the country’s largest city and commercial capital, have already developed immunity against the COVID-19.

“This study has been instigated to evaluate the seroprevalence of anti-SARS-CoV-2 antibodies in different healthcare and community population from Karachi and with the aim of assessing the importance of seroprevalence in these groups,” the report said.

The overall seroprevalence or the immunity rate, it added, is found to be 36% with highest positivity in industrial employees (50.5%), whereas only 13% of health care workers tested positive.

Moreover, the community that comprised of healthy blood donors and walk-in patients for antibody testing had a 34% positivity rate.

Seroprevalence is the incidence of a disease or illness within a distinct population at one time, as measured by serology tests.

The seroprevalence rate, the study pointed out, identified in the US population varies from 1.9 to 6.9%, which is very low compared to Pakistan.

The seropositivity rates reported were 10.8% and 5.0% from Switzerland and Spain, respectively.

The study showed that one-third of Karachi’s industrial population developed immunity against the COVID-19, which is still far from the 60% to 70 herd immunity that is needed.

“In addition, if we consider acquiring 60% of seroprevalence in next couple of months, then herd immunity is not far from reality provided the antibodies did not decline with time,” the report said. “The present study raises the possibility that if 36% of adult population of Karachi is supposed to be seropositive, then we can hypothesize that in the next 2–3 months 60% of general population will become seropositive [immune].”

However, according to Dr. Samreen Zaidi, follow up studies show that the seroprevalence rate has reached 60%, as per expectations.

“We, on the basis of a gradual drop in cases, and other relevant factors, assume that there are low chances of a second wave of coronavirus, ” Zaidi told Anadolu Agency.

However, she acknowledged “assumptions are assumptions.”

“The only limitation with this study is that our sample size is small. Therefore, we have recommended a further and wide-ranging research on the government level to double check the results of this study,” she maintained.

Endorsing Zaidi’s view, Dr. Tahir Shamsi, the head of NIBD, claims the South Asian nuclear state has “almost” attained herd immunity, indicating that there are low chances of a second wave of the pandemic.

“The data this study shows is by July. We are in September now, and the latest statistics, and testing results suggest that the seroprevalence or immunity rate is almost 60% now,” Shamsi, a renowned hematologist, and pioneer of plasma therapy in Pakistan, told Anadolu Agency.

The latest statistics, he said, would be published after a month.

‘No option of being careless’

A similar study conducted by one of the largest laboratories in Pakistan suggested that at least 33% of the country’s health professionals have developed immunity against the virus.

The laboratory conducted tests on 15,000 health professionals across the country for the study.

The number of cases has dropped from nearly 7,000 to merely 400 plus daily cases in the past few months, with daily fatalities hovering in the single digits each day.

However, the country reported 752 new virus cases in the past 24 hours, following the reopening of schools earlier this week. This is the highest figure in the last month-and-a-half.

The country has recorded 304,386 cases, of which 291,683 have recovered, according to Health Ministry data.

The number of fatalities stands at 6,408.

The government is currently following a “mini smart lockdown” strategy. Instead of closing entire streets or shopping centers, only houses or workplaces where infections are reported will be sealed.

“Though, the latest studies, and statistics indicate less chances of a new wave of the coronavirus, there is no option of being careless. The virus is very much there. We cannot afford ignoring safety precautions, ” Shamsi cautioned.

“The problem with this virus is that we still do not know much about it,” he maintained.