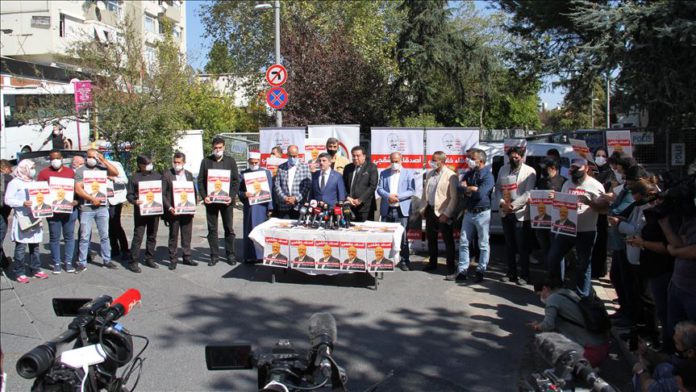 Saudi journalist Jamal Khashoggi on Friday was remembered in front of the Saudi Consulate in Istanbul, where he was murdered, on the second anniversary of his killing.

A commemoration ceremony was held outside the consulate building by international non-governmental organizations and human rights groups.

A moment of silence had been observed for Khashoggi before the commemoration ceremony began.

Yasin Aktay, the advisor to Turkey’s ruling Justice and Development Party chairman, said those responsible for Khashoggi’s murder owe the truth to the world.

“There is still no answer to a very simple question. Where is Jamal Khashoggi’s body?” Aktay asked.

“This question, which the whole world is curious about and is asked by his relatives, is still yet to be answered by the court. If you cannot answer even this simple question, it is very clear that the court you set up is not worthwhile,” he said.

“In an environment where usual suspects can control the court in Saudi Arabia, it is impossible to get a fair verdict there. Indeed, it did not come out,” he added.

Also attending the event was Turan Kislakci, the head of the Turkish-Arab Media Association, who said that they have three demands since the beginning of the case and they are still valid.

“The first was that justice would have been served. Justice has not been served we are still at the same point. The second was the body of Jamal Khashoggi. We have been asking for it for two years, there is still no explanation,” Kislakci said.

“Thirdly … transforming this consulate building where he was killed into Jamal Khashoggi Museum. We still ask the Saudi authorities for it. These three demands are still ongoing,” he added.

Earlier September, the Riyadh Criminal Court commuted death sentences handed down last year to the accused into prison terms of up to 20 years.