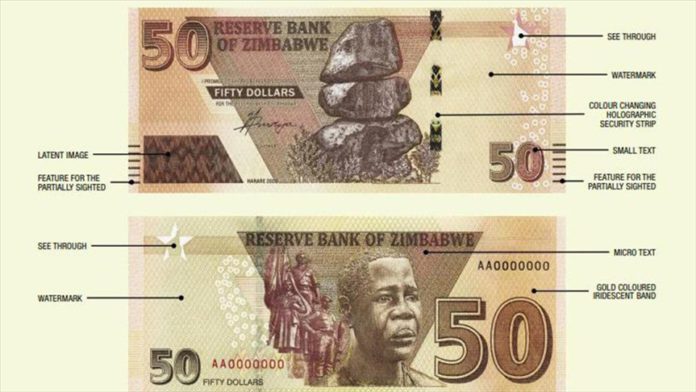 This week’s introduction of a Zimbabwean $50 note as the currency’s biggest denomination is being met with skepticism.

Experts in the Southern African country warned the move could fuel inflation while rendering the lower-denomination bills worthless.

The country’s central bank issued a statement announcing that the new notes would go into circulation on Wednesday, adding: “The bank shall release ZW$360 million through the normal banking channels, and banks are expected to fund the respective accounts.”

But Clemence Mutembo, CEO of the Harare Business Forum in the nation’s capital, said: “Historically the introduction of a higher denomination in Zimbabwe has always caused lower denominations to lose value.”

He told Anadolu Agency: “In our case, the ZW$10 notes will no longer be valued as before. Already the ZW$5 and ZW$2 notes are being shunned; nobody uses them anymore. The bigger the notes we introduce, the smaller notes become worthless.”

Since the country scrapped its own currency in 2009 due to hyperinflation, Zimbabweans have variously relied on US dollars, South African rands, electronic currency, and what are called bond notes.

24 Palestinians injured in clashes with Israeli army in West Bank