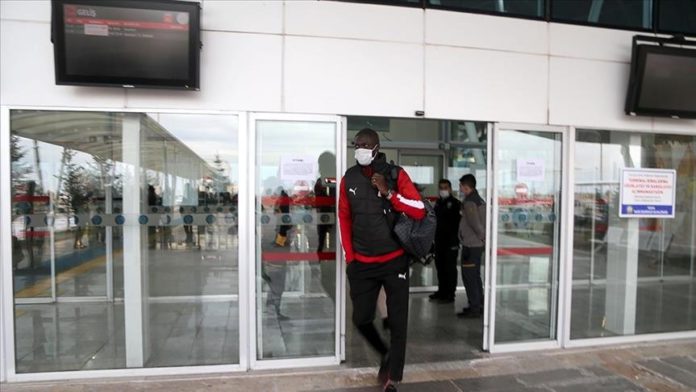 Sivasspor posted a video on Twitter, showing their plane’s landing in the central province of Sivas.

After the landing, the team headed to the club’s premises.

Sivasspor had a 1-0 loss in Thursday’s UEFA Europa League Group I match against Maccabi Tel-Aviv as the Turkish club came third in this group with six points to be eliminated from the Europa League.

Following the win, second-place Maccabi Tel-Aviv bagged 11 points to qualify for the Europa League Round of 32.

Sivasspor said they were stuck in the Israeli airport during their return from Tel-Aviv, putting the blame on the Israeli authorities for their negligence.

The club president Mecnun Otyakmaz told Turkish media at the Sivas airport on Friday that Israeli officials’ aim was to bother the Turkish club and team players.

“Their only goal was to agonize us,” Otyakmaz said.

He reminded that last month Maccabi Tel-Aviv was in Sivas for Europa League match but unlike Israeli officials, Turkish officials hosted them in the best way and Sivasspor saw them off after the match.

But the Turkish team did not face any difficulty while they were entering Israel, he added.

Otyakmaz said that in the halftime of Thursday’s match, Sivasspor sent a majority of the team equipment to Tel Aviv’s Ben Gurion Airport so that they could reach there on time and several club officials went to the airport for boarding passes for the Turkish team.

“Once we arrived at the airport, the Israeli officials said they had a new system, an automated border crossing system. They told us that the automated system was broken and all systems were off,” he said, adding that only one airport official tried to process border crossings manually, which was taking so much time.

Otyakmaz said the Turkish club officials talked to the Israeli officials for speeding up the process but nothing changed, and Sivasspor protested Israeli authorities for their nonchalance.

He noted that Turkey is a hospitable country, but added: “From now on we should treat everybody in the same way as we are treated,” as he was mistreated also at another time when he was in Israel.

He separately slammed Maccabi Tel-Aviv for their lack of interest while the Turkish club was leaving Israel.

Sivasspor also informed the Turkish Foreign Ministry over the mistreatment.

Earlier Friday, Otyakmaz told Anadolu Agency that they left the stadium “very quickly” to get on the plane for an early take-off.

But Israeli officials claimed the opposite.

Asked why the flight was delayed until that time, he said no flights were allowed at the airport between 1 a.m. and 5 a.m. due to noise at night.

Sivasspor officials, including the head of the club Otyakmaz, applauded Israeli authorities at the airport in protest for poor conditions.

The Turkish club also posted a video sharing their protest on social media.

In a tweet, Sivasspor said that after the match Israeli officials at the airport troubled the Turkish club, closing the border crossing system.

“We’ve been stuck here for two hours. The treatment has been very uncomfortable,” Otyakmaz previously told Anadolu Agency, adding that they waited in patience and kept calm.

“The statement on our team’s late arrival is completely false. Our group entered the airport ahead of time. Israeli officials are solely responsible for the loss of time,” the team said in a statement.

“A single officer started carrying out all passport transactions of our group of 43 people. When our group reacted to this, the employee slowed down the process. After all passport procedures were finished, our group was put on two separate airport buses to be taken to the plane,” it said.

The buses could reach the plane in just a few minutes. The bus driver stopped the vehicle and waited for a while and did not answer the questions of our group. After all these planned difficulties, our team was put on the plane,” it added.

*Writing by Can Erozden and Gozde Bayar in Ankara