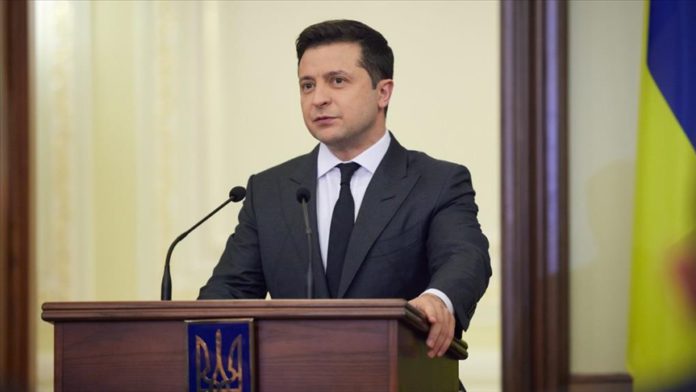 People should not be anxious because the situation in eastern Ukraine is “under control,” Ukraine’s president said on Tuesday.

Volodymyr Zelensky addressed the nation and said decisions made Monday in a meeting of the National Security and Defense Council show that “everything is under control, there is no reason to panic.”

He said the main topic on the agenda was the situation in eastern Ukraine and authorities are doing their best to de-escalate and find a peaceful settlement of the issue.

“We are aware of everything, we are ready for everything, we believe in the best, and we do everything to this end together with our partners, our diplomats, and most importantly, our military,” he said.

Regarding the withdrawal of embassy staff by some countries, Zelensky said the move does not portend “inevitable escalation.”

Over the past few days, the US and Canada have asked families of diplomats to leave Ukraine, with Japan indicating that it could soon follow suit, while the UK withdrawing some staff from its embassy “in response to growing threat from Russia.”

“Embassies of EU countries and many others have kept all their employees in Ukraine. The fact that some countries are taking out some of their diplomats does not mean an inevitable escalation at all; these are subtleties of a complex diplomatic game,” he said.

Zelensky also underlined that Ukraine is working with its partners and acts “as a single team.”

Russia recently amassed tens of thousands of troops near Ukraine’s eastern border, prompting fears that the Kremlin could be planning another military offensive against its ex-Soviet neighbor.

It has, instead, issued a list of security demands to NATO, including Ukraine not joining NATO, to calm existing tensions.