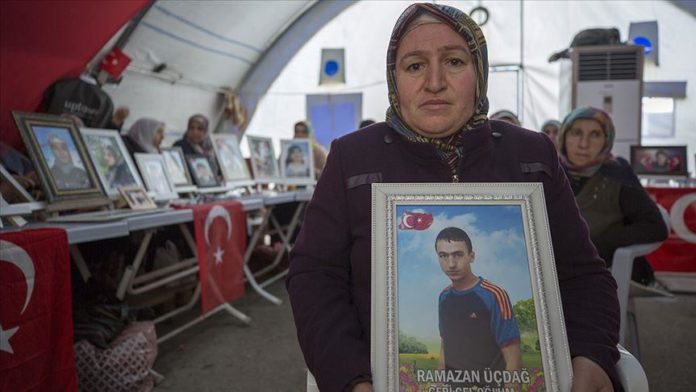 A sit-in protest in southeastern Turkey against the YPG/PKK terror group continued on Thursday, with parents demanding the return of their ‘kidnapped children’.

Protesters camped outside the offices of the opposition Peoples’ Democratic Party (HDP) in Diyarbakir province and vowed to stay until every child was brought back.

On the 318th day of the protest, Aydan Arslan, a mother whose daughter, she said, was abducted by the terror group, called on her to surrender to security forces.

“We will not leave here without our children, we are determined. We will continue our struggle,” Arslan said, adding that her daughter was deceived by the HDP.

Stressing that 15 children returned back to their families, she said she hoped that this would encourage other children.

Father Sevket Bingol said the HDP did not make any statement about the issue.

“I want my child from the HDP and PKK,” Bingol said, adding that he will resolutely continue the sit-in protest until he meets his child.

The protest started last September when Fevziye Cetinkaya, Remziye Akkoyun, and Aysegul Bicer said their children had been forcibly recruited by PKK terrorists.

Since then, the number of families protesting in front of the building and demanding the return of their children — whom they claim were deceived or kidnapped by the terror group — has been rising.