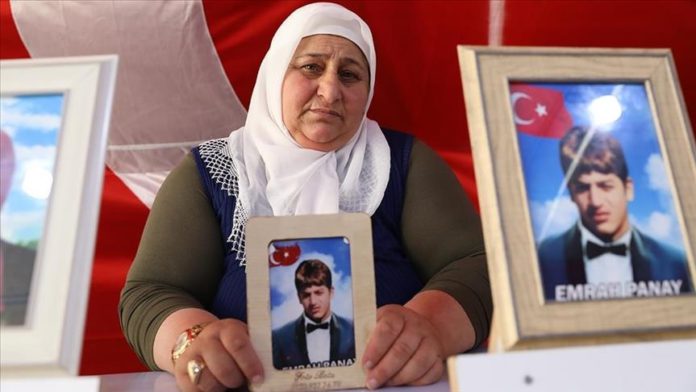 As families of children forcibly recruited and abducted by the PKK terror group continue their sit-in protest in the southeastern Diyarbakir province of Turkey, they call on their disappeared ones to surrender to security forces.

Families have been camping for 699 days outside the Diyarbakir offices of the opposition Peoples’ Democratic Party (HDP), a party the Turkish government says has links with the PKK.

Mother Aynur Panay is among the protesters, and she joined the sit-in to bring back her son Emrah, who, she said, was abducted by the terror group at the age of 13 in the Dogubeyazit district of eastern Agri province.

“My son was tricked by the HDP, handed over to the PKK. … I want my son back,” he said, adding that the recent reunion of three mothers with their children was a source of joy for her and other protesting families.

“For God’s sake, come back, surrender to gendarmerie, police (forces). I have been longing for you for a decade. I’ve missed you so much,” she said.

Another protester, Abdullah Demir, said he is staging the sit-in for his son Fatih, who was abducted by the PKK.

“I’ve not abandoned my son for five years. I will be looking for him till my last breath,” he said.

In its more than 35-year terror campaign against Turkey, the PKK – listed as a terrorist group by Turkey, the US, and the EU – has been responsible for the deaths of at least 40,000 people, including women, children, and infants.

Global steel production up in February