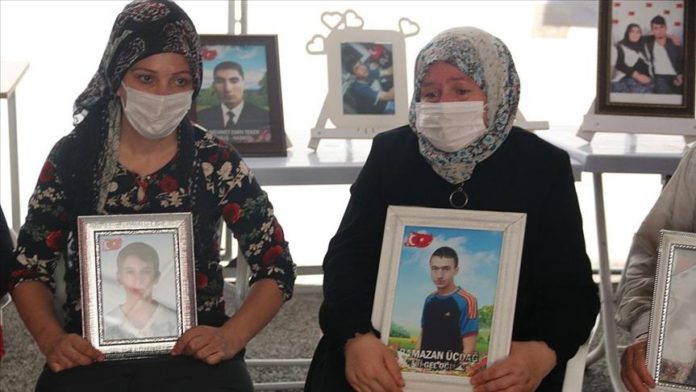 Families in southeastern Turkey whose children were kidnapped by the PKK terror group long to spend the Muslim Eid al-Adha holiday together with them.

They have been protesting for 686 days since Sept. 3, 2019, encouraging their children to give up their weapons and surrender to Turkish authorities.

The protests outside the office of the opposition Peoples’ Democratic Party (HDP) in Diyarbakir started with three mothers who said their children had been forcibly recruited by the terrorists. The Turkish government says the HDP has links to the PKK terrorist organization.

Mevlude Ucdag, one of the protesting mothers, said she wants to hug her son Ramazan on Eid al-Adha this year.

She expressed her determination to continue the protest for her son.

“My son, I will wait for you here as long as I live. I am waiting for you. We have been living without you for 14 holidays. Let’s spend this holiday together,” she said.

She also called on her son to surrender to the security forces.

Nurettin Odumlu, whose son Yusuf was abducted by the PKK at the age 16, said he was sad to spend another holiday apart from him.

“I have not seen my child for 16 holidays,” Odumlu said, calling on him to surrender to the security forces.