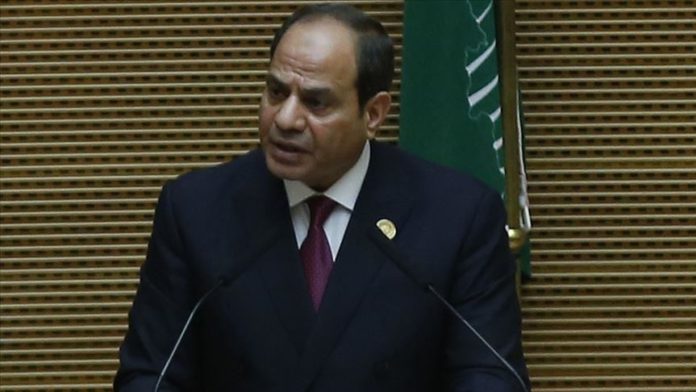 Egyptian President Abdel Fattah al-Sisi’s scathing remarks on the situation in Libya have added a new dimension to the ongoing crisis.

Last month, Sisi said that Libya’s Sirte and al-Jufra airbases were a “red line” and he would arm Libyan tribes in his country to fight in the ranks of East Libya-based warlord Khalifa Haftar.

He also suggested that Cairo could launch “external military missions” into Libya “if required,” saying that “any direct intervention in Libya has already become legitimate internationally”.

Plans have been made to settle Libyan-origin bedouin tribes, who live in the northwest of Egypt, in Libya and to increase the population density in the east of the country.

However, historical hostilities among tribes of Libyan origin show that Sisi’s plan is unlikely to be implemented.

There are many Libyan-origin tribes in Egypt. The largest is known as the Awlad Ali tribe with a population of over a million.

This tribe migrated from Libya to Egypt 130 years ago. The war which took place in 1860 between Awlad Ali and the Abidat tribes in Libya’s Brega region lasted for 30 years.

Awlad Ali had to emigrate to Egypt in 1890 after they lost the war. This forced migration was called Tejridet Habib, a folklore in Libyan culture.

Most members of the Awlad Ali settled in the Egyptian city of Marsa Matruh, which is located between the city of Alexandria in the Mediterranean coast of Egypt and and the al-Sellum district on the Libyan border.

The coexistence of these two tribes is considered a weak possibility due to historical reasons.

The United Arab Emirates and Egypt are planning to substitute the seat of Haftar with Aguila Saleh Issa, the speaker of the pro-Haftar House of Representatives in the eastern city of Tobruk.

However, Issa, who backs Haftar, belongs to the Abidat tribe.

A possible support of Awlad Ali tribe to Haftar would mean that they back the Abidat tribe who exiled their ancestors from their lands.

Therefore, Awlad Ali tribe, which mostly resides in the regions close to the Libyan border, is not expected to send its members to Libya to fight in the ranks of Haftar.

According to Egyptian sources, members of the Al-Jawazi tribe mostly live in Zagazig and Tanta cities in the northeastern Egypt.

Members of the Al-Jawazi tribe do not see themselves as bedouins as they are well integrated into the Egyptian society. Rather, they mostly describe themselves as Egyptians.

Libyan-origin tribes would probably refrain from being a party to the war in Libya through supporting Haftar, as this move would mean “helping those tribes which exiled their ancestors from their lands”.