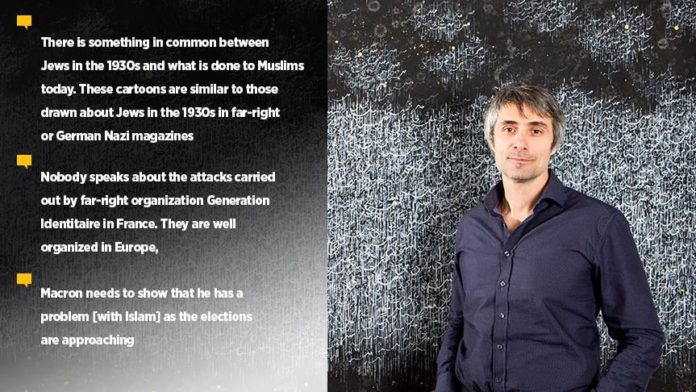 Insulting cartoons published by the Charlie Hebdo magazine about Prophet Muhammad and Islam are similar to those drawn about Jews in the 1930s in far-right or German Nazi magazines, said a French sociologist.

Speaking to Anadolu Agency, Raphael Liogier, professor at the Institut d’etudes politiques d’Aix-en-Provence, said cartoons published by the magazine are violent toward Muslims.

“I believe these cartoons are violent,” Liogier said.

On his thoughts about French President Emmanuel Macron’s recent anti-Islam remarks, Liogier said Macron’s liberal program which enabled him to get elected shifted to anti-Islam over the years.

“Macron is influenced by his circle and wants to show that he is concerned about problems with Islam in the country. Macron needs to show that he has a problem [with Islam] as the elections are approaching,” he added.

Liogier warned against a climate of generalized suspicion toward the country’s Muslim population.

“Nobody speaks about the attacks carried out by far-right organization Generation Identitaire in France. They are well organized in Europe,” he said.

“While organizations like these are ignored, the focus is on the wrong places. This is the result of a paranoid mentality,” Liogier added.

A man who was shot dead by police in the French city of Avignon after accosting passers-by is suspected of belonging to an anti-Muslim, far-right group, local media reported on Friday.

Initial reports on last week’s attack in Avignon in local and international media falsely claimed that the suspect was an “Islamist” who shouted “Allahu Akbar” (God is great) in the street.

Police sources told French daily Le Figaro that the suspect had been undergoing psychiatric treatment and was believed to be a member of the far-right group Generation Identitaire.

However, prosecutors ruled out terrorism as a possible motive.

Generation Identitaire is the French branch of anti-migrant, xenophobic group Generation Identity, which has attracted young people through social media, exploiting fears over refugees and terrorism.

Last month, President Emmanuel Macron accused French Muslims of “separatism” and claimed Islam is “a religion in crisis all over the world.”

Tensions further escalated after a schoolteacher was murdered in retaliation for showing his students offensive cartoons on Prophet Muhammad during a class on freedom of expression.

Macron paid tribute to the teacher and said France would “not give up our cartoons.”

The attack in Nice is one of four acts of terror or potential terror that occurred on Thursday. Two others happened in the French cities of Avignon and Lyon and one in Jeddah, Saudi Arabia at the French consulate.

Macron has called the attack in Nice an act of “Islamist terror”. Prime Minister Jean Castex moved France to an emergency level anti-terrorism plan Thursday as a result of the attacks.

Earlier this year, the magazine republished cartoons insulting Islam and the Prophet Muhammad.

Several Arab countries, as well as Turkey, Iran, and Pakistan, have condemned Macron’s attitude toward Muslims and Islam.