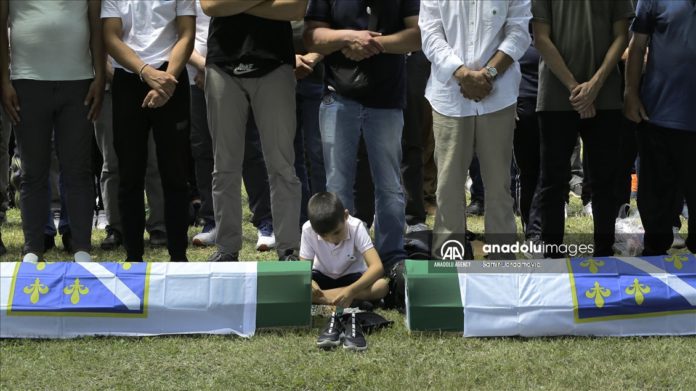 Silence fell over the Potocari Memorial Cemetery on Sunday evening after a day of tearful farewells for 19 more victims of the Srebrenica genocide.

The recently identified victims were laid to rest at the cemetery on the 26th anniversary of the July 1995 genocide, in which more than 8,000 Bosnian Muslims were massacred by Bosnian Serb forces.

Relatives and friends arrived at the cemetery in the early hours of the day for prayers and burial of the victims of the genocide, which has been described as Europe’s worst atrocity since World War II.

The youngest of the newly identified victims was 16-year-old Azmir Osmanovic and the oldest 63-year-old Husein Kurbasic.

The others laid to rest on Sunday were:

The number of Srebrenica genocide victims buried at the Potocari Memorial Cemetery now stands at 6,671.

In 2007, the International Court of Justice in The Hague ruled that genocide had been committed in Srebrenica.

SREBRENICA, BOSNIA AND HERZEGOVINA – JULY 11: People perform funeral prayer for 19 victims of the Srebrenica Genocide, whose identities have been detected, at Potocari cemetery in Srebrenica, Bosnia and Herzegovina on July 11, 2021. ( Samır Jordamovıc – Anadolu Agency )