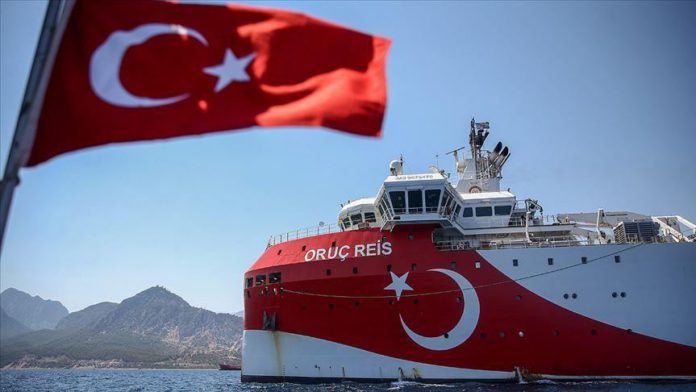 Turkey’s energy exploration ship is continuing its determined mission in the Eastern Mediterranean, said the National Defense Ministry on Sunday.

“Strong, Determined and Powerful! The frigates and corvettes belonging to our Naval Forces are resolutely continuing their duty of escorting / protecting the ORUC REIS research ship, which continues to work in our jurisdiction areas in the Eastern Mediterranean,” the ministry posted on Twitter with a nearly two-minute video of the ships at work.

“No lawlessness or bullying will be allowed in the region!” the ministry added.

The video also showed communication between the ships and elements affiliated with Turkish Naval Forces Command.

Despite opposition from Greece and some other countries, on Aug. 31, Turkey again extended the Oruc Reis’s energy exploration in the Eastern Mediterranean in an area within Turkey’s continental shelf, this time through Sept. 12.

Ankara has also said energy resources near the island of Cyprus must be shared fairly between the Turkish Republic of Northern Cyprus (TRNC) and the Greek Cypriot administration of Southern Cyprus.

Turkish President Recep Tayyip Erdogan has said the only solution to the dispute lies through dialogue and negotiation to reach a win-win deal for sharing, and has urged Athens to respect Turkey’s rights.

‘Turkey has suffered most from disinformation campaigns’