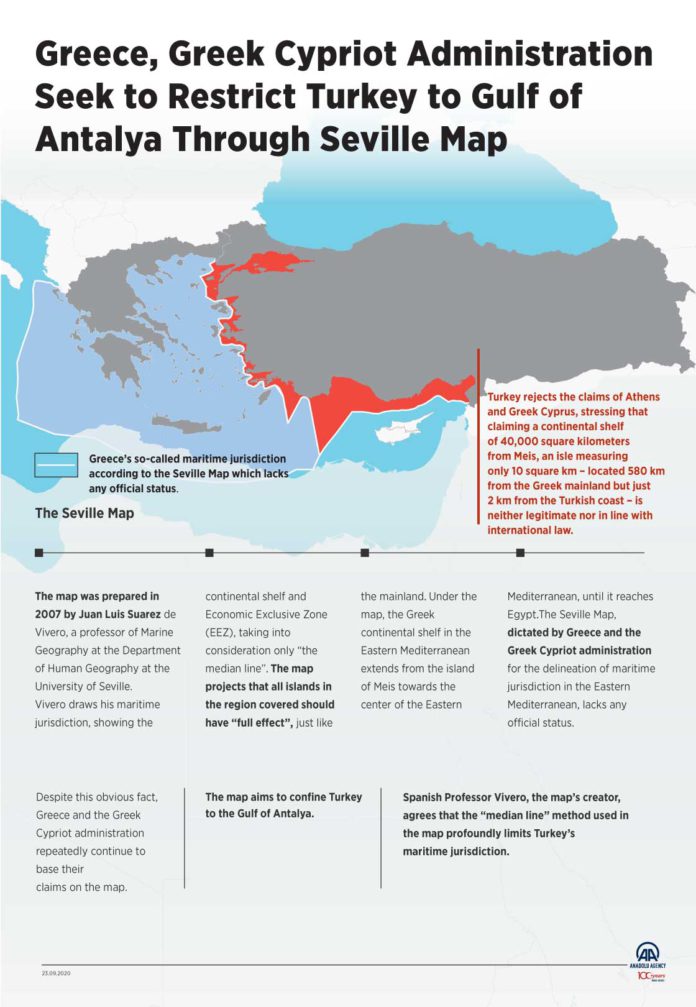 The so-called Seville Map – a map that Greece and the Greek Cypriot administration try to use to impose maritime borders in the Eastern Mediterranean – was drawn up unilaterally and ignores relevant sections of international law, according to a maritime legal expert.

“States determine their borders based on the law of the sea. However, especially in semi-closed and closed sea areas, these borders may coincide with the borders of another state,” Professor Hakan Karan, director of the Ankara University Research Center of the Sea and the Maritime Law, told Anadolu Agency.

“The Eastern Mediterranean is such an example of this,” he added.

Karan added that the Seville Map backs Greek arguments and was prepared unilaterally for academic purposes, not legal ones.

Referring to the 1982 UN Convention on the Law of the Sea (UNCLOS), he said that every island has territorial waters and that if it also has a “social life,” this gives it a continental shelf and exclusive economic zone (EEZ).

“When we look at Meis, we see that there is social life on the island. Therefore, since Greece is a party to UNCLOS, it claims that the Meis has a continental shelf and EEZ. However, the same convention also underlines [the doctrine of] fairness,” he said.

Turkey has urged negotiations without preconditions to reach a fair sharing of the region’s resources, stressing that using small islands near Turkey – which has the longest shoreline on the Mediterranean – to deprive it of almost all maritime territory is not fair.

“The Seville Map takes one part of the UNCLOS into account while ignoring the other,” said Karan. “It also ignores the decisions given by the International Court of Justice. It is an illegitimate map in this way.”

He added that Turkey is not a party to UNCLOS.

In a statement, the US Embassy in Ankara on Monday said that the country does not consider the Seville Map to have any legal significance.

Despite the statement, Greece and the Greek Cypriot administration of Southern Cyprus – along with some sources close to the EU – keep using the controversial map as a tool to isolate Turkey by giving it no territory outside of the Gulf of Antalya, southern Turkey.

The map was prepared in 2007 by Juan Luis Suarez de Vivero, professor of marine geography at the University of Seville in southern Spain.

The map, named after the university, claims to determine the continental shelf and the exclusive economic zone (EEZ) according to the median line.

It recognizes all of the islands in the region as “mainland” by giving them “full effect.”

The map suggests that the boundaries that Greece claims in the Aegean and Mediterranean seas as its continental shelf and the EEZ declared by the Greek Cypriots in 2004 indicate the official borders of the EU.

This map claims that Greece’s continental shelf starts from the tiny island of Meis – just 2 kilometers (1.2 km) from the Turkish coast – and goes south to the middle of the Mediterranean Sea, which gives Turkey no territory outside of the Gulf of Antalya.

Ankara rejects this claim of a 40,000-square-kilometer continental shelf projected from a 10-square-km island lying just 2 km from the Turkish shore, but 580 km (360 miles) from the Greek mainland.

Vivero later wrote in an article that the conflict in the Aegean is as old as the rivalry between Turkey and Greece itself.

“In this case, the equidistant line is so close to the Turkish coast that it leaves the majority of the sea’s jurisdictional waters in the hands of a neighbouring country (Greece),” he wrote.

“If we then include the proximity of an island-state such as [Southern] Cyprus in the mix, we see that Turkey’s jurisdictional waters are excessively small, which poses both economic and geo-political problems,” he added, reflecting Turkey’s arguments.