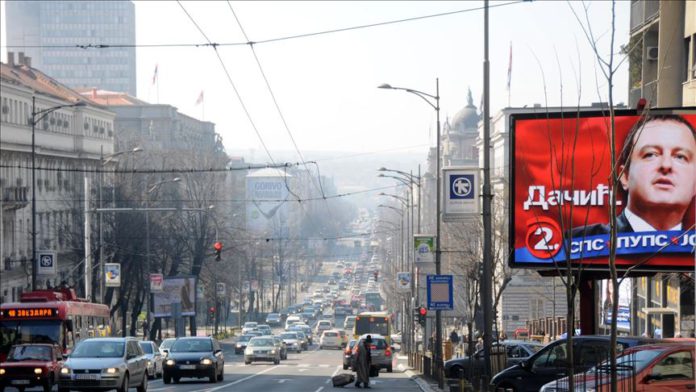 As the world wrestles with the novel coronavirus pandemic, Serbia on Sunday will hold general, local, and autonomous region elections.

Voters will head to the polls to determine the names and parties that will govern the country both locally and nationally for the next four years.

In Serbia, the effect of the pandemic has disappeared for the most part, with casualty numbers and daily cases having decreased to the 50-100 band and major measures removed.

More than 6.5 million voters have registered to cast their ballots and elect lawmakers from among 21 election lists competing to enter the 250-seat national assembly.

Voters will also elect the 120-seat assembly of the Autonomous Province of Vojvodina in the north of the country and new members of local city and town councils across the country.

The campaigning ban commenced on Friday to continue until the end of voting. During this period, political parties will not be able to hold rallies or run propaganda on media outlets.

Serbian nationals living abroad will also be able to vote at 40 diplomatic missions.

Elections postponed once due to pandemic

Though normally scheduled for April 26, the polls had to be postponed to prevent further spreading of COVID-19.

Local observer agencies including the CRTA, CESID and Anti-Corruption Agency will accompany ODIHR, as will the European Election Monitoring Organizations Network (ENEMO) for the first time.

About 3,419 candidates will compete on a total of 21 lists on Sunday.

The Serbian Progressive Party (SNS), led by current President Aleksandar Vucic, is first among election lists, while second was the Socialist Party of Serbia (SPS) alliance, a partner in the ruling government, and Unique Serbia (JS).

Meanwhile, The Serbian Radical Party (SRS), led by convicted war criminal Vojislav Seselj, is in third place and followed by the Alliance of Vojvodina Hungarians, Victory for Serbia, For Kingdom of Serbia (Movement for the Restoration of the Kingdom of Serbia, Monarchist Front) and United Democratic Serbia.

While Muamer Zukorlic’s Justice and Reconciliation Party (SPP) is allied with the Democratic Party of Macedonians (DPM), fellow Bosniak politician Sulejman Ugljanin’s Party of Democratic Action of Sandzak (SDA Sancak) will participate in the election with an independent list.

Also, one of the prominent figures of recent anti-government protests, Sergej Trifunovic’s Movement of Free Citizens and Coalition for Peace led by Cedomir Jovanovic of the Liberal Democratic Party (LDP) will also run in the elections.

Among the lists to participate in the election are also BROOM 2020, Milan Stamatovic – May The Health Win – Dragan Jovanovic – Better Serbia – Healthy Serbia, the Serbian Party Oathkeepers, the People’s Bloc, the Souverainists, the Albanian Democratic Alternative – United Valley, Group of Citizens: 1 of 5 million, the May the Masks Fall – Green Party – New Party, the Russian Party and the far-right Leviathan Movement.

Other parties intend to boycott the elections, including the Democratic Party (DS) of former Belgrade Metropolitan Mayor Dragan Djilas, the far-right Dveri Movement and the opposition Union for Serbia (SzS) alliance.

The Union for Serbia (SzS) argues that the minimum legal and health conditions are absent for a fair and democratic election.

Meanwhile, unlike previous elections, the legal threshold for a list to enter parliament was revised down to 3% in this general election, from 5%.

According to the amendment, the threshold will not apply to minority parties.

One of the most striking moments in election campaigning was when President Vucic’s party held his first rally online. Vucic addressed a room specially designed for party sympathizers who were connected online to the rally and projected onto a giant screen.

Another election campaign image that attracted attention, especially on social media, was with Serbian Social Democratic Party (SDP) Chairman Rasim Ljajic, who jumped on supporters in a surge of enthusiasm at a meeting in Novi Pazar.

Serbia’s Bosniak population in the Sandzak region will in this election decide between three important Bosniak political figures on different lists: Ugljanin, Ljajic, and Zukorlic.

While the SDP led by Ljajic is allied with President Vucic’s SNS, Ugljanin’s SDA Sandzak and Zukorlic’s SPP are participating in the elections with independent lists.