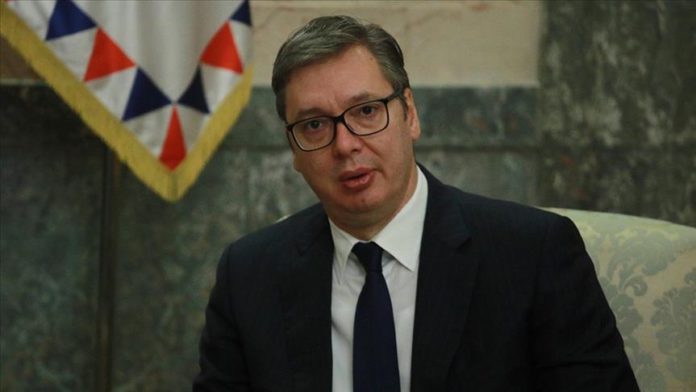 Amid ongoing political tensions in Bosnia-Herzegovina, Serbian President Aleksandar Vucic has said that no one in the region is interested in war.

In an interview with Pink TV on Saturday night, Vucic said neither Bosniaks, Croats, nor Serbs want war.

“We must work together to protect the peace. No one wants to go to war. What matters most is that we accept responsibility for the situation. We have the opportunity to progress and develop as a unit, and we should not miss it,” he remarked.

He, however, emphasized his concern about foreigners’ unilateral approach to the situation in Bosnia-Herzegovina, saying between the lines that he would like to see them play a helpful part in resolving the current political situation.

Vucic pointed out that the ongoing highway project between Bosnia-Herzegovina’s capital Sarajevo and Serbia’s capital Belgrade should be on the agenda when Turkish President Recep Tayyip Erdogan visits Belgrade for a trilateral meeting.

“The highway portion in Serbia was already built, and during my recent meeting with Erdogan, I raised the Bosnia-Herzegovina part of the project,” he said, adding, “That’s why my visit to Ankara was important for solving the Sarajevo problems.”

“This is one of the topics that will be discussed at the trilateral summit that will take place following Serbia’s elections,” he added.

The Sarajevo-Belgrade Highway project supported by Turkiye is often described as a “historical infrastructure project” by the leaders of the region.

In 2018, Turkish firm Tasyapi signed a contract with the Serbian government to build the landmark highway.

Turkiye sees the project as a way to promote regional peace.

Bosnia-Herzegovina is currently embroiled in a political conflict between Bosniaks and Serbs living in the country.

The dispute erupted after Valentin Inzko, then high representative, amended the criminal code in July to ban the denial of genocide and the glorification of war criminals.

Bosnian Serb lawmakers in response said they would boycott the country’s institutions.

Milorad Dodik denounced the amendments and pushed for controversial separatist moves in the Republika Srpska parliament.

The steps have been criticized internationally for violating the 1995 Dayton Accords and undermining the country’s Constitution.​​​​​​​