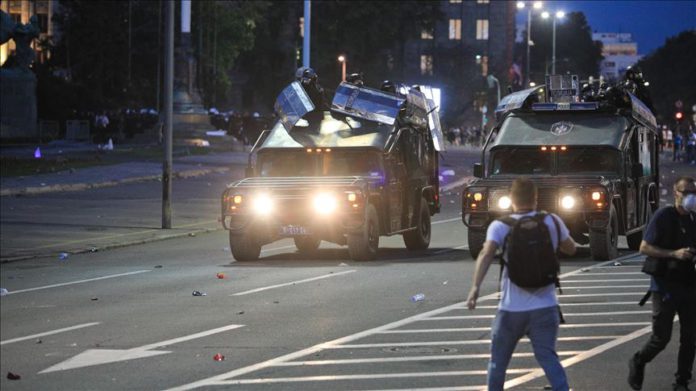 Thousands of protesters took to the streets of Serbia’s capital again Wednesday after the government moved to impose new measures to curb a rise in coronavirus cases.

The protests, which began Tuesday evening in Belgrade, spread to other major cities including Nis, Kragujevac and Novi Sad.

The demonstrations erupted after President Aleksandar Vucic announced Tuesday that a weekend curfew would be re-imposed in an effort to combat the pandemic.

Large numbers of people gathered in front of the National Assembly Building in Belgrade.

Protesters clashed with police while attempting to enter the building as gendarmerie forces set up a cordon on the steps in front of its entrance.

Traffic was stopped in that part of the city.

Among those who gathered were some opposition leaders.

Meanwhile, the door of the radio and television building in the city of Novi Sad was broken with stones.

Many police officers were injured during the protests.

Vucic said earlier Wednesday that he would not let anyone destroy peace and stability in Serbia.

He said foreign provocateurs helped escalate the protests triggered by COVID-19 restrictions into a riot and led to arrests.

“There was a failure on the part of security services because we only later saw that there was an influence not only of the criminal factor but also foreign services,” he said, adding that on Tuesday night, “extremists” took over events in an organized way.

He added that the curfew he announced will probably not go into effect.

Serbia has confirmed 17,076 cases and 341 deaths from the disease, while the number of recoveries totals 13,562, according to data from US-based Johns Hopkins University.

April 3, 2020
We use cookies to ensure that we give you the best experience on our website. If you continue to use this site we will assume that you are happy with it.Ok