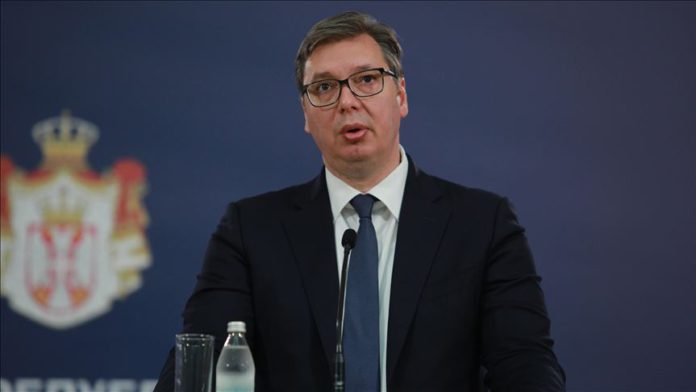 Serbia’s president on Thursday rejected a US proposal of mutual recognition with Kosovo, according to Belgrade’s top diplomat.

With a Serbian delegation in Washington for two days of talks sponsored by the US aimed at improving relations between the two Balkan war foes, Aleksandar Vucic firmly turned down the proposal, which was reportedly among other points in the talks on economic cooperation.

“Vucic made it clear to his interlocutors that the so-called mutual recognition is absolutely unacceptable. The paper with this point was never presented to us, but only the one on economic topics. Vucic has said several times that we want a compromise, but they obviously think that we should recognize Kosovo,” said Foreign Minister Ivica Dacic.

Meanwhile, Vucic told reporters after the negotiations that he hoped to reach an agreement without the recognition of Kosovo’s independence.

“People from [US President Donald] Trump’s cabinet were fair. They listened to what we had to say. There is no such provision in the new documents. We hope it is possible to reach an agreement. There are very good things about our economy,” said Vucic.

“Tomorrow we’ll be able to show you the final document if there is one. There is no possibility for me to sign any document that implies the recognition of Kosovo, and I have clearly said that to both the Albanians and Americans.

“We’re still fighting. I’m not sure that we’ll be able to put in the agreement that the American Development Fund will open an office in Belgrade and that Pristina will accept Little Schengen, with American guarantees. There are some more political aspects,” he added.

Finance Minister Sinisa Mali, who headed the Serbian delegation, said: “We’ve never received a worse paper; 16 points are on the table, of which the 10th point envisages mutual recognition. There are also economic topics, but above all, this is on the table. There is a lot of pressure.”

Mali underlined that the Serbian delegation had arrived in Washington to discuss economic issues.

“We came up with the idea to invest three, four billion euros, to build apartments for young people, to invest in roads, railways. But then you come and see the point where mutual recognition is on the table. The fight continues,” Mali told reporters during a break in the talks.

“You have 15-20 people who are against you and are putting pressure. They react aggressively to every sentence,” he said.

The arrangement, organized by Richard Grenell, the US president’s special envoy on Belgrade-Pristina dialogue, is considered historic for the region as Serbia refuses to recognize the independence that its former province Kosovo declared in 2008.

The US meeting was planned for June 27 but was postponed after prosecutors in The Hague filed an indictment against Kosovo President Hashim Thaci for war crimes during Kosovo’s 1998-99 war with Serbia.

Most UN member states recognize Kosovo as an autonomous country. Belgrade, however, maintains that it is a breakaway province and has worked to roll back its recognition.

The European Union has been leading negotiations between the two sides for nearly a decade, a requirement for their progress towards European integration.

Washington, which has recently sought a role in the process, hopes that economic cooperation could help set them on the road for a normalized relationship.