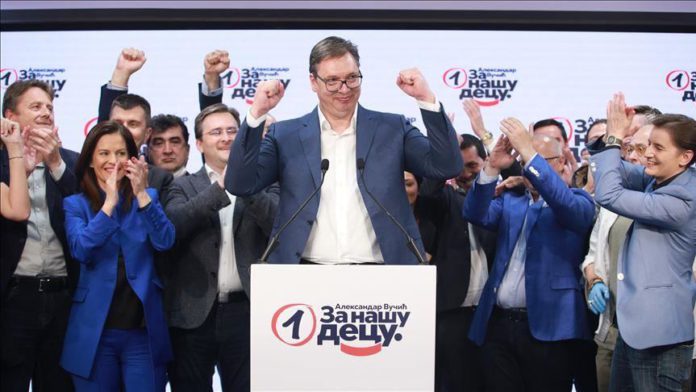 The coalition led by the president’s Serbian Progressive Party (SNS) came to power single-handedly in Sunday’s parliamentary elections, according to preliminary results.

According to unofficial results announced by Ipsos and Cesid on Monday, Aleksandar Vucic’s coalition won 62.6% of the votes based on 93% of the votes counted.

While only three political alliances passed the 3% election threshold, the Socialist Party of Serbia (SPS) – Unique Serbia (JS) coalition got 10.9%, and the Serbian Patriotic Alliance (SPAS)-led Victory for Serbia alliance won only 4.2%.

Based on these figures, the SNS coalition won 189 seats, the SPS-JS 32, and SPAS 12 seats in the 250-seat national assembly.

Meanwhile, the State Election Commission (RIK) said that with 61% of the votes tallied, the count will be completed as soon as possible and official results will be announced on Thursday.

Ipsos and Cesid said election turnout was below 50%.

The opposition Union for Serbia (SzS) alliance, which boycotted the elections, argued that the low turnout showed that the boycott was successful.

Addressing the nation, Vucic on Sunday night said that they got the greatest support from the public in the history of Serbia.

Environmental disasters across world in July 2020