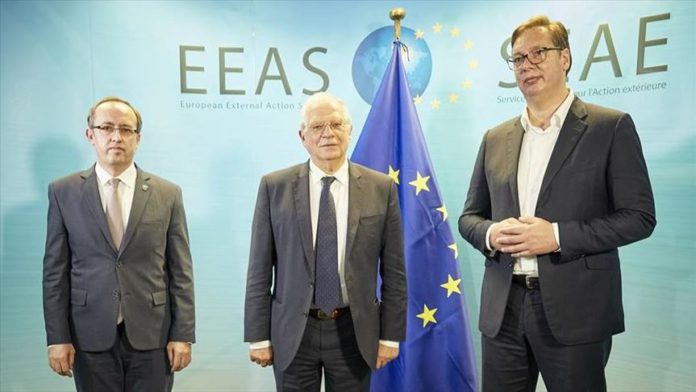 Talks between Serbia and Kosovo resumed Thursday after a 20-month break.

Vucic said a remarkable solution option was not offered to the parties but talks would continue.
He said discussions were not easy but progress was made on missing persons, displaced persons and the economy.

“Serbia is ready to fulfill every request of the Albanian side and that wherever they think there is a grave, we are ready to show whether there is something there or not, but we asked for the same for us,” said Vucic.
Serbia is ready to cooperate to find more than 1,600 missing persons, an issue that have not been achieved since the war in Kosovo from 1998 to 1999, he said.

“It’s okay, but they have to open the archives of the Kosovo Liberation Army (UCK) so we can see where Serbs and other non-Albanian people were killed,” Vucic said.

Hoti said the only solution for normalization of relations is a mutual recognition of Serbia and Kosovo, and the meeting focused on missing persons and economic cooperation.
“I am convinced that we have the opportunity to make progress because we have the support of key EU countries and mediator, Lajcak,” according to Hoti, who said the most important thing is that there is a political will to end this process in the coming period.
Before the meeting, Borrell stressed the aim is to restart serious and intense efforts to normalize relations between the two sides and the EU to continue to support efforts at reaching a comprehensive and result-oriented agreement.
“The insolvability of the issue is disrupting the development of both sides. We are aware that it is not an easy process. It never was easy,” said Borrell.
Dialogue between Serbia and Kosovo began in 2011 after Kosovo declared independence from Serbia in 2008.
As Belgrade still insists it was part of Serbia, the EU initiated talks.
However, due to the political crisis between the two governments, talks have stalled many times.
Kosovo imposed 100% customs duty on products imported from Serbia and Bosnia and Herzegovina until Serbia recognizes its independence.
Even though the EU and the US urge Kosovo to withdraw its tax decision as soon as possible, Kosovo continues to ignore the calls.
Earlier this month, Kosovo announced a ban on Serbian officials entering the country.
Kosovo’s independence has been recognized by over 100 countries, including the US, Britain, France, Germany and Turkey. Those who have not yet recognized its independence include Serbia, Russia and China.

October 23, 2020
ANKARA Not wars, but climate change will change the world map in the 21st century, according to a Turkish scientist. Speaking to Anadolu Agency, Burcu Ozsoy,...

October 23, 2020
ISTANBUL As Turkey’s Middle Eastern neighbors Syria and Iraq grappled with years of war and conflict, Turkey saw a wave in artifact smuggling from these...

April 1, 2020
We use cookies to ensure that we give you the best experience on our website. If you continue to use this site we will assume that you are happy with it.Ok