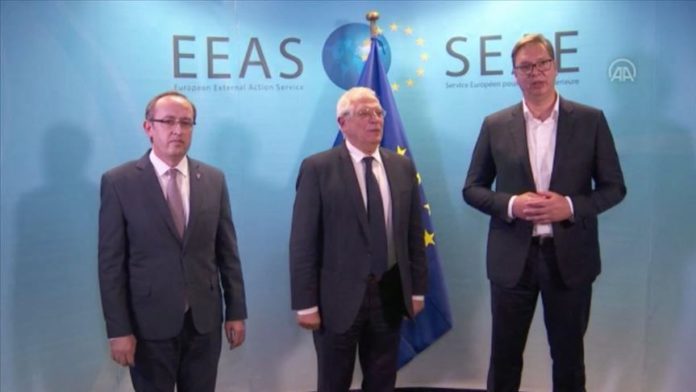 Hosted by Josep Borrell — the bloc’s foreign policy chief — Vucic and Hoti discussed arrangement of non-majority community and the settlement of mutual financial claims and property for the first time.

“Our negotiations today were intense, as usual, and not always easy, but what prevailed was the will of both sides to advance the discussions despite the painful and complex issues at hand,” Miroslav Lajcak, the EU special representative for Kosovo-Serbia dialogue, said in a statement.

They also made “full progress” on topics of economic cooperation and missing people that were already discussed at their previous meeting in July in Brussels.

Hoti and Vucic both confirmed their commitment towards EU integration and their willingness to advance with the EU-facilitated Belgrade-Pristina dialogue.

The negotiations will continue on an expert level next week and the leaders will return to it later this month.

The high-level reunion was the second occasion that Vucic and Hoti meet in Brussels since the talks resumed in July.

Launched in 2011, the EU-led process promotes dialogue between Belgrade and Pristina to normalize relations between the two Balkan countries and find a mutually agreeable solution for the disputes in the framework of a legally binding agreement.

The negotiations had been stalled in the past two years because of a disagreement among EU member states.

In April, Lajcak was appointed the EU’s special envoy to restart EU-led negotiations.

Kosovo declared its independence from Serbia in 2008, with most UN member states recognizing it as a separate autonomous country from its neighbor. Belgrade, however, maintains it is a breakaway province and has worked to roll back recognition.