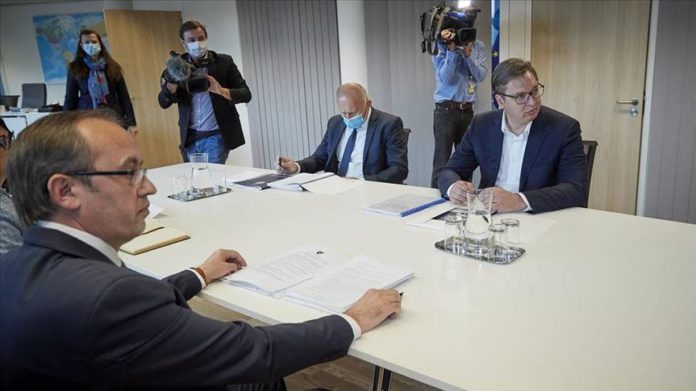 The Serbian and Kosovar leaders are set to hold a US-sponsored two-day dialogue in Washington aimed at improved relations between the Balkan war foes.

Serbia’s President Aleksandar Vucic and Kosovo’s Prime Minister Avdullah Hoti will reach the US capital on Thursday. They will meet at the White House on Friday, and a new round of expert-level dialogue is scheduled two days later in Brussels.

The arrangement, organized by Richard Grenell, US president’s special envoy for Belgrade-Pristina dialogue, is considered to be historic for the region as Serbia refuses to recognize the independence that its former province Kosovo declared in 2008.

While Serbia’s focus will be on economic cooperation, Hoti insists that mutual recognition is the only topic he can discuss with Serbian officials.

In that case, Vucic said, he may reject a meeting with US President Donald Trump and the Kosovo premier.

“That would make me the first Serbian president who was offered a bilateral meeting with the US president, and also the first one who rejected it,” he said.

Vucic said only one item of the forthcoming meeting’s official agenda was unacceptable. He did not specify it but said the Sept. 3 and 4 talks will be “difficult.”

Earlier this week, speaking at the Bled Strategic Forum in Slovenia, the president said Serbia must cooperate with the Europeans and the Americans on Kosovo. Politics would be discussed under the auspices of the EU while economic issues in the US, he added.

Meanwhile, Serbia’s Foreign Minister Ivica Dacic said creative solutions should be sought to resolve bilateral disputes, which is in the interests of both sides.

“The current situation on the ground is unconstitutional, given that Belgrade does not have its entire territory under control, nor does Pristina,” he said.

The US meeting was planned for June 27 but was postponed after prosecutors in The Hague filed an indictment against Kosovo’s President Hashim Thaci for war crimes during Kosovo’s 1998-99 war with Serbia.

Most UN member states recognize Kosovo as an autonomous country. Belgrade, however, maintains that it is a breakaway province, and has worked to roll back its recognition.

The EU has been leading negotiations between the two sides for nearly a decade, a requirement for their progress toward European integration.

The US, which has recently sought a role, hopes that economic cooperation could help set them on the road for a normalized relationship.

COVID-19: No new case in Taiwan as strategy bears fruit