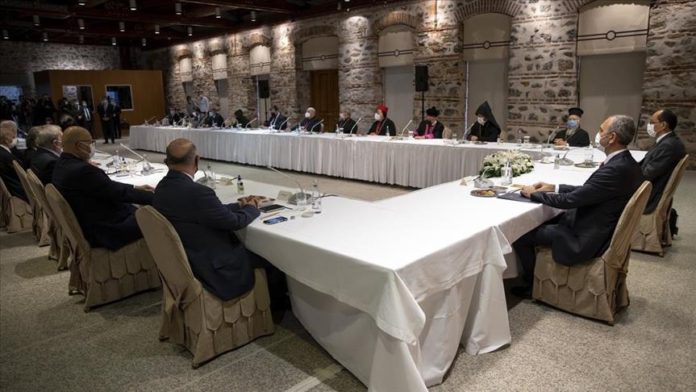 Fener Greek Patriarch Bartholomew; Archbishop Sahak Mashalian, the 85th Armenian Patriarch of Turkey; Yusuf Cetin, the metropolitan bishop of the Istanbul-Syriac Church; and Ishak Haleva, Chief Rabbi of the Jewish community in Turkey, were present at the meeting held in the Dolmabahce presidential working office.

Gul said they had an important and efficient consultation meeting with representatives of the minority communities, adding important steps were taken under the leadership of President Recep Tayyip Erdogan during Justice and Development (AK) Party governments for 18 years.

“Especially in 2008, we have seen once again that all the steps taken after and before the regulations on foundations have yielded very important results in removing the obstacles in front of minorities,” Gul said.

He went on to say that suggestions regarding property rights, the right to education and the right to organize were discussed at the productive meeting.

Noting that the ruling AK Party demonstrated an approach to increase freedom for all citizens, Gul said they also addressed further steps against hate crimes.

Kalin also said they had a very productive meeting with the spiritual leaders and representatives.

He said members of the minority communities, who could not find any addressees in the state before, are now accepted and addressed at the highest authorities of the state.

“As you know, with the Endowments Law enacted in 2008, a historical, revolutionary change took place and the properties and immovables which belonged to foundations were returned to them.”

He added that some specific issues related to churches, schools and properties which are on the agenda of the minority representatives were also discussed at the meeting.

“It is extremely important that we fight against hate crimes and discrimination with a single voice, especially at a time when both anti-Islamism, anti-Semitism and anti-Christianity are on the rise all over the world,” he said.

“We have stated here once again that there is no legal or humanitarian basis to condemn, accuse or make anyone an object of hate, regardless of their religious identity, because of their religion, ethnic identity or belief.”