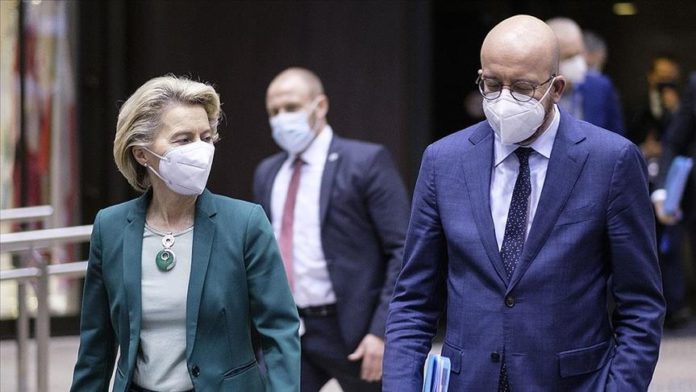 Turkey is in no way responsible for the controversy over seating arrangements during top EU officials’ visit to Ankara last week, Turkish official sources said, adding the problems stemmed from rifts between the EU Council and the EU Commission officials.

“It has been observed that the signs of friction between the Council and the Commission officials actually emerged the evening before their meeting with Turkish President Recep Tayyip Erdogan at the Presidential Complex, and it became more clear at the hotel before their arrival to the complex,” the sources said.

Kirsi Punkkinen, the council’s protocol official, apologized that the problem was caused by internal rifts and is not related to the Turkish side, they said on condition of anonymity due to restrictions on speaking to the media.

On Tuesday, Charles Michel, head of the EU Council, and Ursula von der Leyen, head of the EU Commission, visited Ankara and met with Erdogan as part of diplomatic efforts to improve relations between the bloc and Turkey.
Ahead of the meeting, von der Leyen was seen surprised as Michel was offered a chair next to Erdogan, but she was not offered an equivalent seat and sat down on a sofa.

Speaking to reporters Thursday, Cavusoglu downplayed the incident, saying Turkey had satisfied all protocol requests from the EU side.
The Turkish sources said Ankara did not receive any special requests before the meeting regarding the seating arrangement.

“It is essential that the guest country’s front delegation officials express all their demands regarding the visit in the clearest way … in order to have a successful meeting,” they added.

It appears that the head of the protocol of the EU Council was misled on the issue, it said, adding Punkkinen and Von der Leyen’s new diplomatic advisor Fernando Andresen Guimaraes had enough time to correct a possible mistake.

The EU officials claimed that in the dining room, to which they were given access a few moments earlier, they had the size of the three chairs for the VIPs realigned for the benefit of the head of the EU Commission.

The Turkish authorities drew attention to the fact that the EU side was misled on the issue.

Accordingly, the visiting delegation officials were invited to the working dining room as soon as the tete-a-tete meeting started and they were provided with information about the arrangement there.

Before their meeting, Erdogan asked both Von der Leyen and Michel as to how they would like to have their photos taken, and they decided to take a photo together, it said.

However, the EU Council Press shared a photo of Erdogan and Michel on Twitter cutting the EU Commission chief from the photo, it added.