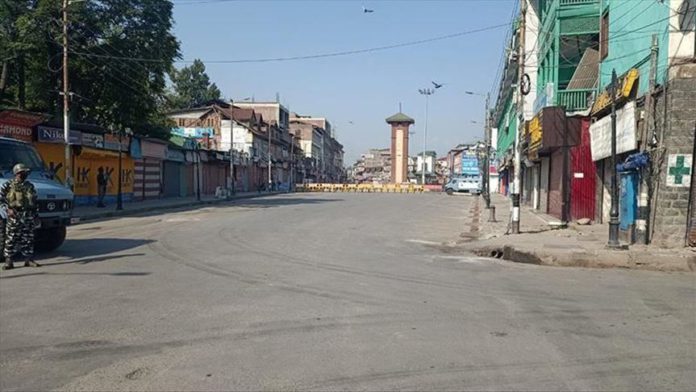 The abrupt closure of a decades-old local English-language daily in Indian-administered Kashmir has dealt yet another blow to press freedom in the region, with journalists saying the move is meant to silence credible voices of dissent.

On Monday, the estates department of the Jammu and Kashmir region sealed the offices of the Kashmir Times, founded in 1954, without giving its owner/Editor-in-Chief Anuradha Bhasin any communication or eviction notice.

The move was made 15 days after Bhasin was evicted from her government-allotted premises in Jammu and also four days after a credible and prominent news wire, Kashmir News Agency, was verbally asked to vacate its office in Srinagar, the region’s largest city and sometimes capital.

“I see it as a willful attempt by the government to silence voices who speak out based on facts,” Bhasin told Anadolu Agency.

“I don’t understand why they are singling out us [journalists] just because we’re reporting facts,” Bhasin said.

‘The censorship they are imposing on us has to be dealt with strongly and with unanimity,” Bhasin added.

Bhasin has been one of the independent voices critical of measures taken by the Indian government since August 2019, when Jammu and Kashmir was downgraded and divided, particularly measures related to media gagging, intimidation, and media policy.

Bhasin was the only member of the Kashmir media fraternity to challenge before the Indian Supreme Court the legality of the post-August 2019 communication blackout, after which the placement of government advertisements in the paper ceased, depriving it of a critical source of revenue.

‘Not against the press’

After the Kashmir Times’ Srinagar offices were sealed, a higher official of the estates department who asked not to be named told Anadolu Agency that the move was one “according to court orders to evict the occupants, who are illegally holding the public property.”

The official said that the premises had been allotted to the late Ved Bhasin, founder of the Kashmir Times, and was sealed as the journalist had died in 2015.

“This move is governed by law, and there is no vengeance against any media professional,” the anonymous official told Anadolu Agency.

However, many journalists in the region are questioning why the move was made now.

Yusuf Jameel, a senior journalist in the region, told Anadolu Agency that if the allotment expired years before, this begs the question why the action was taken now and why the authorities did not produce any eviction notice or other communication.

The move is actually willful harassment and intimidation, he said.

“Unfortunately, there has been a trend in recent decades of silencing journalists and hindering their work on various pretexts in the Jammu and Kashmir region,” he explained.

“It is this trend which has seen a phenomenal rise now, and this is an abnormality.”

The International Federation of Journalists (IFJ) and its Indian affiliate the Indian Journalists Union (IJU) on Wednesday condemned the regional administration’s move and urged the government to reverse its decision.

“The J&K’s administration’s move is no more than an effort to silence critical voices regarding government policies, programs and activities,” they said in a statement.

“The J&K government should reverse the move, stop the harassment of Anuradha Bhasin and support an environment that enables a free and independent journalism to thrive.”

The Indian Journalists Union said the move “is merely retaliation by J&K administration for its Executive Editor Anurudra Bhasin filing a case with the Supreme Court of India against the internet shutdown,” said Geetartha Pathak, the group’s head. “The IJU strongly condemns the incident and urges authorities to allow free press to function independently.”

International groups Reporters Without Borders and the Committee to Protect Journalists have also condemned the move.

“Authorities must stop trying to silence independent and critical voices and should respect press freedom,” said the CPJ.

In a Tuesday statement, the Network of Women Journalist of India (NWMI) also condemned the government “muzzling” the free press in the Jammu and Kashmir region.

In the meantime, in solidarity, many working journalists in Kashmir are offering free services to the Kashmir Times to help them out in this difficult situation.

Over a dozen journalists have stepped forward to help the Kashmir Times’ editorial team to sustain the paper.

Tariq Mir, an independent journalist wrote: “In the face of the government’s crackdown on the Kashmir Times, a newspaper many of us grew up reading, we offer our professional help.”

India already ranks 142 out of 180 countries in the World Press Freedom Index, as it is “heavily affected by the situation in Kashmir,” according to Reporters Without Borders.

“I hope we will fight it out, as the silence which we have endured needs to be broken,” Bhasin told Anadolu Agency, while thanking many media professionals in the region for their overwhelming show of support.