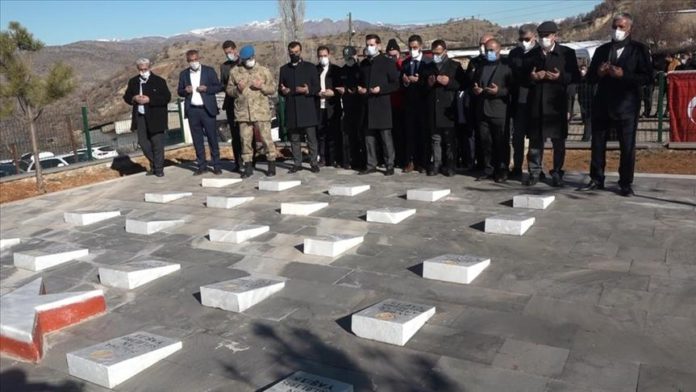 Locals in a rural neighborhood in southeastern Turkey on Thursday commemorated the deaths of 23 civilians, including six children and nine women, who were martyred by the PKK terror group 25 years ago.

Local authorities and victims’ families were among those attending the commemoration event in the neighborhood, including District Governor Mustafa Gozlet.

Gozlet said the country had since conducted a successful war on terror and that PKK’s terror attacks had not gone unpunished.

Also speaking at the ceremony, Mustafa Cicek, a relative of some of the victims, remarked that the PKK undermined the fundamental rights of Kurdish people while claiming that it fights for their liberty.

In its more than 30-year terror campaign against Turkey, the PKK — listed as a terrorist organization by Turkey, the US, and the EU — has been responsible for the deaths of 40,000 people including women, children, and infants. The YPG is the PKK’s Syrian offshoot.