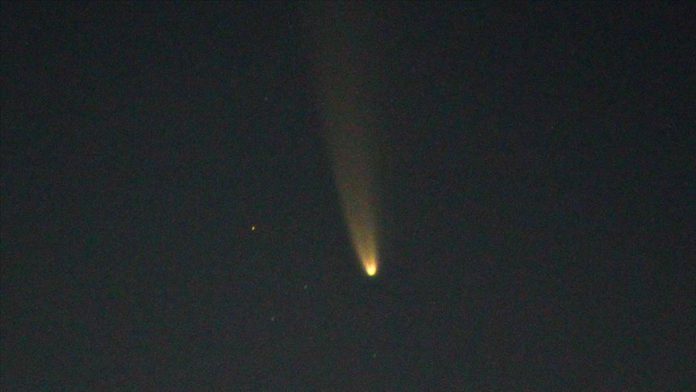 Scientists at a university in the Turkish capital Ankara viewed Comet C/2020 F3 (NEOWISE), the first easily-visible comet to appear in around 6,700 years.

Mesut Yilmaz, head of Kreiken Observatory and associate professor at Ankara University’s Astronomy and Space Sciences, told Anadolu Agency that the comet was discovered on March 27 by screening observations of the Neowise Project run by NASA.

Yilmaz stressed that NEOWISE is a long-term comet and completes its tour around the Sun in about 6,700 years, and said: “The comet came to the nearest point to the Sun on July 3 and began to move away from the Sun.

“These days, astronomy enthusiasts work hard to observe that comet. We also observed the Comet C/2020 F3 (NEOWISE) with the camera at Kreiken Observatory. When the images were taken, the comet was 135 million kilometers [83.88 million miles] from the world and its brightness was about 3 magnitude,” he added.

Underlining that the comet began to reach the closest position to Turkey as of Wednesday, Yilmaz said: “This evening, after the sun goes down, it can also be observed with the naked eye in a position away from the city lights in the northwest direction. Sky enthusiasts will be able to see NEOWISE right under the Ursa Major constellation.”

Yilmaz also said the comets are primitive remnants of ice-rock-iron mixture that remained from the formation of the Solar system 4.5 billion years ago.

Frozen gas-dust structures of these remains break off due to the pressure of the high light beams as they approach the Sun, Yilmaz said, adding that the tail of a comet may be between 500 meters (1,640 feet) to 30 kilometers (18.64 miles) as it approaches the Sun. The tail can sometimes extend up to 100 million kilometers (62.1 million miles), he added.