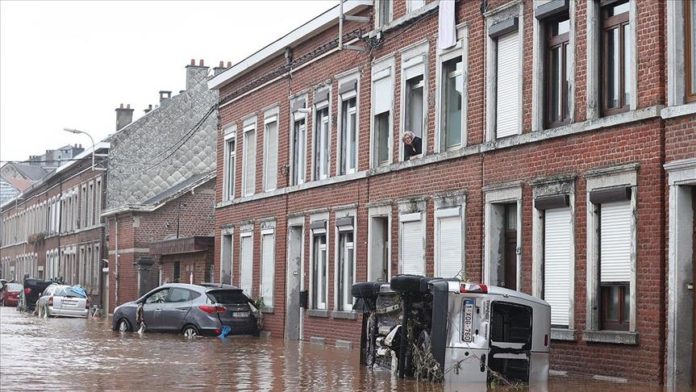 “Germany and Belgium have been the worst-affected in terms of loss of life, but it’s not just the flooding,” said Nullis. “At the same time, parts of Scandinavia are enduring a lasting heatwave. Smoke plumes from Siberia have affected air quality across the international dateline in Alaska. That’s how far the smoke has traveled.”

She said unprecedented heat in western North America has triggered devastating wildfires and the smoke is traveling huge distances.

Some parts of Western Europe, notably Germany, Belgium and the Netherlands, received up to two months of rainfall in two days on July 14 and 15, worsening soil saturated by previous rain.

“And these are, in highly developed countries with very good early warning systems and disaster management. This indicates the scale of this disaster as we’ve seen images of houses being swept away. It’s really devastating,” she said.

The devastation is not just Germany, where the country’s weather service described it as a “catastrophe,” and Belgium, but Luxembourg, the Netherlands, Switzerland, and northeastern France have also been hit.

While central Europe suffered deadly floods, northern Europe has been gripped by an extended heatwave.

According to its weather body, Finland had its warmest June on record and the heat extended into July.

Kouvola Anjala, in southern Finland, has seen 27 consecutive days with temperatures above 25°C (77 F), the country’s most prolonged heatwave.

“This is Finland; it’s not Spain; it’s not North Africa,” said Nullis.

According to the Finnish meteorological service, the Gulf of Finland in the Baltic Sea is in record-warmth, up to 26.6°C on 14 July, the warmest since records began 20 years ago.

The western US and Canada have also been gripped by heat, with records broken in the most recent heatwave last weekend in the southwestern US.

According to the US National Weather Service in Las Vegas, Death Valley, California, reported a temperature of 130°F (54.4°C) on July 9.

The WMO said it is ready to verify new extreme temperatures.

“We are currently evaluating the 130°F reading in August 2020 at Death Valley, which holds the world’s highest temperature record,” said Nullis.

She said everybody asks: ”What about climate change?”

Nullis said what was seen in parts of the US and Canada at the end of June has led to rapid attribution surveys conducted by a prominent group of climate researchers and results were published last week.

“They said this heatwave would have been virtually impossible without the influence of human-caused climate change,” said the WMO spokeswoman.