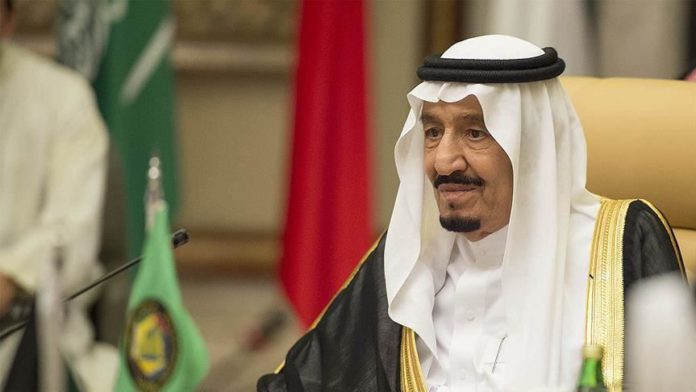 Saudi King Salman bin Abdulaziz on Wednesday said that his country supports Washington’s efforts to bring the Palestinian and Israeli sides to the negotiating table.

His remarks came in a speech he delivered at the 75th UN General Assembly via video link, according to the Saudi Press Agency.

King Salman said: “Peace in the Middle East is our strategic choice […] and the kingdom has launched peace initiatives since 1981.”

“The Arab Peace Initiative [2002] included foundations […] that would ensure that the Palestinians gain their rights, foremost among which is the establishment of an independent state with East Jerusalem as its capital,” he added.

Salman continued: “We support the efforts made by the current American administration to bring peace to the Middle East via the Palestinian and Israeli sides sitting at the negotiating table to reach a fair agreement.”

On Sept. 15, the United Arab Emirates and Bahrain signed US-brokered normalization agreements with Israel at the White House; ignoring the Palestinian rejection. Yet, Riyadh has not declared its rejection or support for these agreements.

Regarding the situation in Libya, the Saudi monarch called on “all Libyan brothers to come to the negotiating table.”

Speaking about the last month’s Beirut port blast, he said: “What happened in Beirut was a result of the domination of the Iranian terrorist Hezbollah in decision-making in Lebanon by force of arms, which led to the disruption of the constitutional state institutions.”

He stressed that “achieving the security, stability and prosperity that the brotherly Lebanese people aspire to requires disarming this terrorist party.”

On Aug. 4, Beirut was shaken by a huge explosion in its port, which left 192 people dead and more than 6,000 others wounded, in addition to losses estimated at $15 billion, according to official figures.

Commenting on Iran, Salman stressed that “Iran continues to target the kingdom with ballistic missiles and drones” referring to the attacks by the Iran-backed Houthi rebel group in Yemen.

He added: “Our experiences with the Iranian regime have taught us that partial solutions and attempts to appease have not stopped its threats to international peace and security.”

He went on saying: “There must be a comprehensive solution and a firm international position that guarantees a radical treatment of the Iranian regime’s pursuit of weapons of mass destruction, its interference in the internal affairs of other countries and its sponsorship of terrorism.”

He stressed that “the kingdom will not be complacent in defending its national security, nor will it abandon the Yemeni people until they regain their full sovereignty and independence.”

Yemen has been beset by violence and chaos since 2014, when Houthi rebels overran much of the country, including Sanaa, the capital.

Nigerians sue China for $200B over coronavirus pandemic