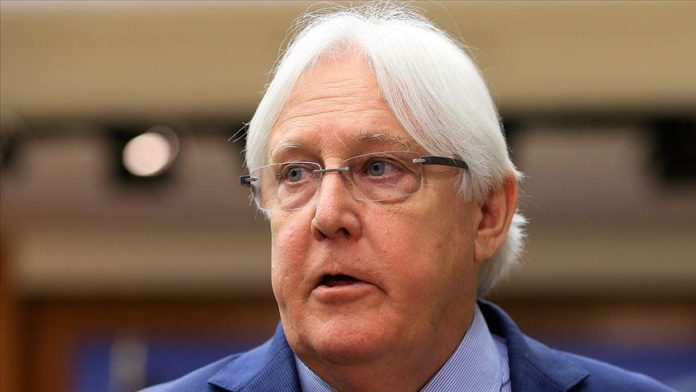 The UN envoy to Yemen, Martin Griffiths, said Tuesday that the Saudi commitment to reaching a political settlement to the Yemeni conflict was crucial.

“We discussed ways to overcome obstacles facing prospects for peace in Yemen,” Griffiths said on Twitter. He stressed on the importance of the commitment of the kingdom and the region to reach “a negotiated, Yemeni-led, inclusive political settlement” towards ending the conflict “comprehensively and sustainably”.

Griffiths gave no further details about the meeting.

Bin Salman, for his part, said that his discussions with the UN envoy focused on the kingdom’s humanitarian response in Yemen among other developments.

“I assured the envoy of KSA’s commitment to reach a comprehensive political resolution according to the three references, which will ensure peace and stability for Yemen and the region,” he tweeted.

On January 6, Griffiths held talks with Yemeni President Abd Rabbo Mansour Hadi in Riyadh during which the UN envoy condemned a missile attack against the newly formed Yemeni government at Aden airport and reiterated commitment to comprehensively bringing the protracted conflict to an end “through a negotiated, political solution.”

For years, the UN has been making repeated diplomatic efforts to reach a political solution to the Yemeni conflict without significant success on the ground.

On Monday, the Yemeni government welcomed a US plan to designate the Houthi group as terrorist organization.

A Saudi-led coalition aimed at reinstating the Yemeni government has worsened the situation, causing one of the world’s worst man-made humanitarian crisis with nearly 80% or more than 24 million of its people needing humanitarian assistance and protection and more than 13 million in danger of starving to death, according to UN estimates.