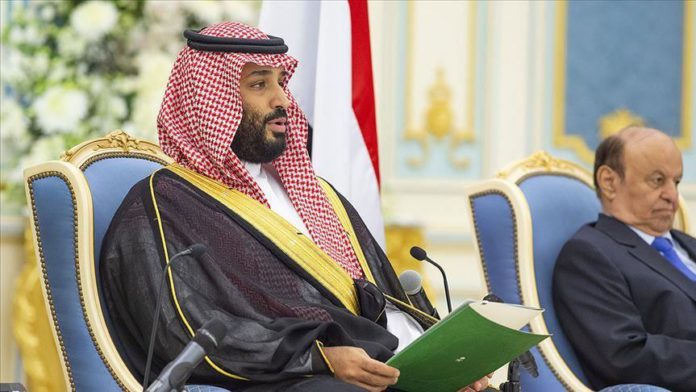 Saudi Arabia is planning to reshape the Yemeni government to include the UAE-backed forces of the separatist Southern Transitional Council (STC) as a part of it.

The government will be reformed in a way to be welcomed by the STC and main political parties in the country, according to a senior Yemeni official speaking to Anadolu Agency on condition of anonymity.

Riyadh will make the ministerial distribution in the new government on the basis of the northern and southern regions, according to the official.

Hadi is expected to hold the Ministries of Foreign Affairs, Defense, Interior, and Finance in the new Cabinet.

Saudi authorities forwarded the new Cabinet draft to Hadi for a review, the official said, adding that a total of 24 ministries will be included in the new government.

According to the draft, three ministries will be given to the STC.

The STC will abandon the so-called “self-governance” before beginning any political arrangement with the Yemeni government in accordance with the Riyadh agreement, a Yemeni political source told Anadolu Agency on condition of anonymity.

It made a very clear commitment to comply with the Riyadh agreement at a time when Saudi Arabia is conducting consultations in the capital Riyadh to resolve the Yemeni crisis, the source said.

The council also pledged to “work in line with the future government program, adopt the Yemeni flag and comply with the current constitution,” according to the source.

All STC forces will be immediately pulled out of the Aden province under the supervision of Saudi Arabia, the source noted.

No statement has yet been issued from Saudi Arabia, the Yemeni government or STC regarding the draft in question.

The Riyadh agreement was signed between the government and STC in November following one month of fighting, and included 29 terms to address the political, social, economic, and security situations in Yemen’s southern provinces. Both parties, however, blamed each other for not abiding by the agreement.

Yemen has been devastated by a conflict that escalated in March 2015 after Iran-backed Houthi rebels seized the capital Sanaa and forced President Hadi to flee the country.

Turkey’s inflation rate down in July