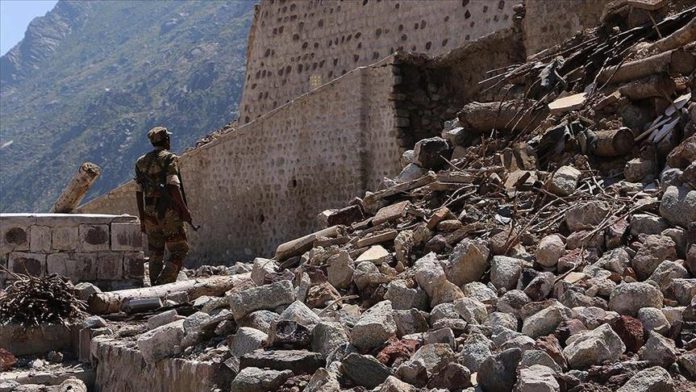 Since Houthi takeover of much of Yemen from the internationally recognized government in September 2014, the eastern al-Mahra province managed to stay far from the ongoing war in the country.

However, its geographic position along the border of Saudi Arabia and Oman made it a sought-after zone of control for both countries.

Recently, al-Mahra witnessed unprecedented divisions among local people as they organized two different gatherings supporting two different groups fighting over the leadership of the General Council of al-Mahra and Socotra.

One mass gathering took place at the house of Sheikh of the Qumsit tribe, Abboud Haboud, which ended by announcing a new leadership for the council, as an alternative to Abdullah bin Isa Al-Afrar, who is currently living in United Arab Emirates (UAE) and has been chairing the council since its establishment in 2012.

Another gathering was organized by supporters of Al-Afrar to reject the new leadership, describing it as a “coup” against the council.

This argument was not new as the area witnessed other political disputes, but the latest disagreement emerged after the fall of Socotra in the hands of the UAE-backed Southern Transitional Council (STC) forces, which happened with help from Al-Afrar.

“This action pushed some supporters to rectify the council’s course and change its leadership where they succeeded to hold a conference and select a new leadership,” Badr Kalashat, al-Mahra provincial deputy for youth affairs, told Anadolu Agency.

Frequent tensions with Iran and the uncertainty surrounding the reliability of the Strait of Hormuz, a strategic passageway for oil exports from the Gulf region, have placed additional pressure on Saudi Arabia to seek delivery alternatives.

In August 2018, a leaked document revealed the kingdom’s intention to build an oil pipeline that would carry oil from Saudi Arabia to the coast of al-Mahra, Nishtun seaport, providing direct access to the Arabian Sea and Indian Ocean.

After the rejection of former Yemeni President Ali Abdullah Saleh to grant Saudi Arabia control over the required territorial corridor to construct and monitor this oil pipeline, the Saudis saw a unique chance in the outbreak of Yemen’s civil war in 2014 to gain what it has been planning for years.

“Saudi Arabia sees al-Mahra as a strategic area on the Arabian Sea, far from Iran’s control of the Strait of Hormuz, and considers its coasts possessing a potential threat for drug and arms smuggling activities,” Abdulsalam Muhammed, chairman of Abaad Studies & Research Center, told Anadolu Agency.

To achieve its goals in al-Mahra, Riyadh began increasing its presence in Yemen after mid-November 2017, by taking control of al-Mahra’s facilities, Nishtun port, Sarfit port, Shehen border crossings, and al-Ghaydah Airport, in addition to establishing military settlements around key infrastructure and coastal areas.

“The Yemeni government does not oppose the Saudi project, but instead stated in many occasions that as long as the province’s sovereignty is preserved, any Gulf project must achieve the government’s interests and should preserve its rights, sovereignty and territorial integrity without provoking any regional and sectarian strife,” Muhammed said.

Al-Mahra has been the most influential foreign presence for Oman, but the deepening Saudi footprint in the province created a potential risk to Muscat’s interests in Yemen.

In an effort to preserve the current balance of power and contain the Saudi ambitions in the area, Oman has traditionally relied on offering humanitarian aid and citizenship for locals as they share many commonalities with Omanis and have great relations with each other through history.

“Oman believes that the presence of the Saudi and Emirati forces in al-Mahra holds a threat to its national security,” Mutahhar al-Sufari, a Yemeni researcher, told Anadolu Agency.

“It is no longer a secret that Oman is supporting the demonstrations, tribesmen and the local community by providing aid and logistics. Last year, Oman established Al-Mahriya TV channel that focuses its coverage on criticism of the Saudi and Emirati military presence in al-Mahra and Socotra,” he noted.

Yemeni President Abd Rabbuh Mansur Hadi and his government have tried to contain the situation in the province by appointing a new governor in the province, Muhammed Ali Yasser.

“The governor managed to strengthen his impact on the tribes and other groups of society to hold the province under control,” Kalashat emphasized.

However, Al-Sufari believes that, “The Yemeni and Saudi governments tried to send a positive signal to Oman through the appointment of the new governor in place of Rajih Bakrit, who was accused of collusion with the Saudis, but this step did not bring positive results due to the expansion of the Saudi military presence and increasing protests.”

With uncertainty over the Gulf competition in al-Mahra, Muhammed believes that the conflict will continue until the Yemeni state regains its decision-making and sovereignty.

“Currently, Saudi Arabia is the strongest on the ground, especially with its full coordination with the Americans regarding the fight against terrorism. There might be some bloody clashes between the two groups supported by Oman and Saudi Arabia,” he said.

Nevertheless, Kalashat opines that “the divergence of opinions and disagreements will not reach divisions because the people of al-Mahra are linked by tribal customs that limit divisions and clashes, and political matters do not affect them so much”.

Al-Sufari, however, believes that, “The future of the conflict depends mainly on the extent of the Saudi military presence and the implications of the Riyadh Agreement whether more empowerment will be given to the Yemeni government or to its opposing factions. There might be some understanding between Saudi Arabia and Oman, but its chance of success is limited and temporary”.

On the other hand, “the Mahri community is expected to witness a division at the local components and conflicts may occur over the representation of the province, as a result of regional polarizations. The conflict may deviate from its peaceful character and we may witness some rough clashes and perhaps some acts of violence,” he added.