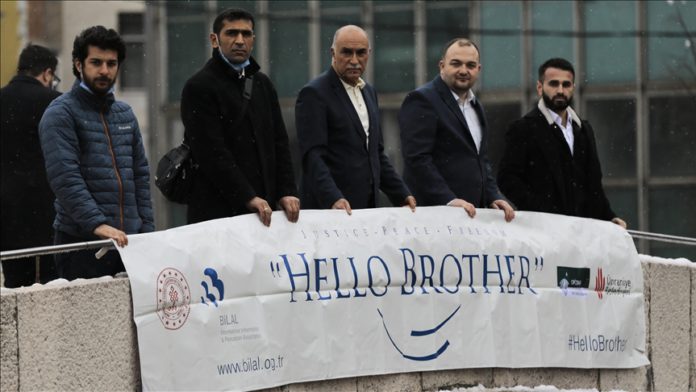 An event in Bosnia and Herzegovina to mark the second anniversary of an Islamophobic massacre in Christchurch, New Zealand gave messages of unity and fellowship to the world.

The event was organized by Turkey’s International Information & Perception Association (BILAL) on Monday in Sarajevo to commemorate the March 15, 2019, terrorist attack on two mosques in Christchurch, New Zealand where 51 people were killed and 49 others injured.

Terror victim Haji Daoud Nabi, a 71-year-old Afghan national, said, “Hello, brother” to the gunman – who went on to massacre dozens of innocent Muslims in Al Noor Mosque – moments before the terrorist shot him dead.

During the event, Nabi’s final words were written on a banner that was hung from the historic Latin Bridge, the scene of the assassination that started World War I.

Omer Lutfi Turkmenoglu, the group’s head, said that Nabi’s message was significant and can be understood by everyone regardless of religion.

“Terror has no nation. Terror has no religion,” Turkmenoglu said, adding that a terror attack carried out by a member of religion does not necessarily concern that faith.

“Therefore, we care that all people in the world put their prejudices aside and see Nabi’s message by stressing the individuality of crime,” he said, adding that his group works for the unity of Islam.

Yahya Tuyan, the brother of one of Christchurch victims Zekeriya Tuyan, said that they learned about the massacre from television.

Decrying the “treacherous” attack on innocent people engaged in prayer, he said: “Two years have passed, but the pain of my brother’s loss is still fresh.”

He added that they came to Bosnia and Herzegovina to give a message of fellowship to the world, as the country was also subjected to massacres, referring to the 1995 genocide.

Mustafa Boztas, a survivor of the attack, said he had been in New Zealand since 2009 and was in Christchurch that year to study.

Boztas said he was shot in his leg during the attack but managed to escape by a window as the terrorist left the mosque.

Last August, white supremacist Brenton Tarrant, a 29-year-old Australian, was sentenced to life in prison without the possibility of parole.