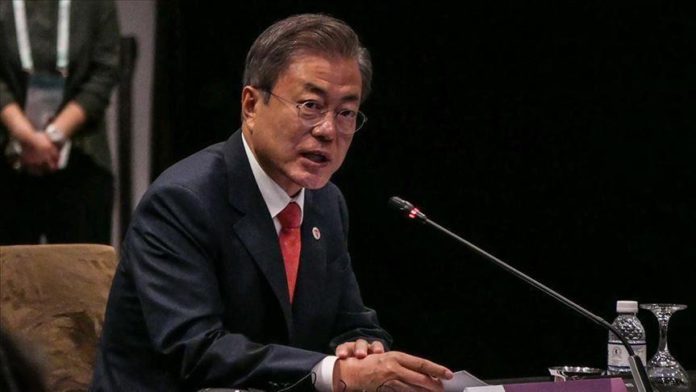 South Korean President Moon Jae-in offered Japan on Monday to address all bilateral issues through dialogue, according to local media.

Addressing his nation on the “Independence Movement Day,” Moon said his country will not stop pressing for closer cooperation with Japan.

“Our government is ready to sit down with the Japanese government anytime and have dialogue,” Yonhap News Agency quoted Moon as saying. He added that it will also be helpful to the trilateral partnership with the US.

Moon further said he is sure that the neighboring countries can resolve pending issues related to a common history “wisely” if they share ideas with a position of “putting themselves in each other’s shoes.”

Diplomatic relations between the two countries remained at an all-time low over the past year after a South Korean court ordered Japanese firms to compensate victims of forced labor during Japan’s colonial rule.

The ruling was rejected by Tokyo, which maintains that all claims related to its 35-year rule over the Korean Peninsula were settled under a 1965 bilateral agreement.

The issue of “comfort women,” according to Japan, was resolved through a 2015 agreement with Seoul, under which Tokyo paid $9.1 million for the establishment of a foundation dedicated to supporting wartime sex slavery victims.

The victims, euphemistically labeled “comfort women,” filed the case in 2013 and the first hearing was held last April.

The move angered Tokyo, which views the agreement as “final and irreversible.”

He also assured Tokyo that his country will cooperate for the success of the Tokyo Olympics, scheduled to take place later this year.

During his speech, Moon also vowed to continue his efforts for the denuclearization of Korea and lasting peace.

He reaffirmed the three-point principles on inter-Korean relations: zero tolerance for war, a mutual security guarantee, and co-prosperity, according to the agency.

The South Korean president hoped that Pyongyang will begin cooperation with other countries with the participation in the “Northeast Asia Cooperation Initiative” intended to promote partnerships against public health crises such as the COVID-19 pandemic.

“It would serve as a force to open the door for co-prosperity and peace on the Korean Peninsula and East Asia,” the president said.