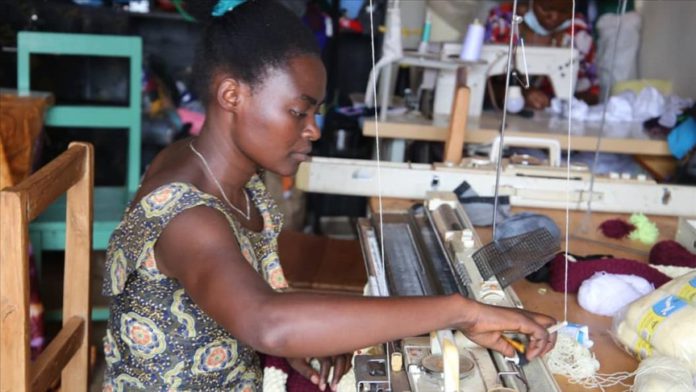 While visually impaired individuals without education are generally considered a burden in many societies, Peninnah Niyobyose, 32, in Rwanda has set an example by unveiling her entrepreneur skills in tailoring and farming.

Speaking to Anadolu Agency to mark the Disability Week which was observed from May 10-16 Niyobyose said living a dependent life, where her family at times was ignoring her was killing her, till she joined the Masaka Resource Centre for the Blind (MRCB) in 2019.

A resident of Rusizi district, in western Rwanda, Niyobyose was blind at birth. From being dependent on her family and friends, she has evolved into a successful entrepreneur, not only becoming independent but also supporting the education of her younger sisters.

“I learned about the training center from a friend with visual impairment who had completed training there. He visited me at home and shared testimonies about how the center had changed his life. This offered me a glimpse that my life could also change one day,” she said.

Niyobyose was helped to start livestock farming on a small scale from which she got manure for growing vegetables.

She planted cabbages, carrots, and applied goats’ manure in the garden. With income from vegetables, she was able to expand livestock farming.

Within days, she got a contract to sew school uniforms. She now looks to expand her business and get more customers after relocating her business to the capital Kigali.

“I have my own business. I share rental space with three other tailors. My life has changed thanks to knitting, I work for individuals and businesses with sewing contracts,” she said.

Niyobyose can produce at least four t-shirts per day, charging between 4000 and 5500 Rwandan francs each (about $5).

“Besides providing for my daily needs, I pay school fees for my young sister who is in secondary school. The most important thing is that I live on my own, unlike previously when I was considered a dependent,” she said.

Marie Leontine Mukamisha, a businesswoman who was trained in tailoring by Niyobyose in Kigali said she learned a lot from her.

“She is a good trainer and so friendly, the tailoring skills she taught me enabled me to set up a sewing business,” she said.

Rwanda Union of the Blind has been helping people with visual impairment in the East African country to build independent lives and realize their potential through a project called Dream project.

“With funding from donors, the project empowers visually impaired individuals through rehabilitation and provision of skills to them,” according to Donatile Kanimba, RUB’s executive director.

Documentary on Turkish coffee to be screened in 6 US cities