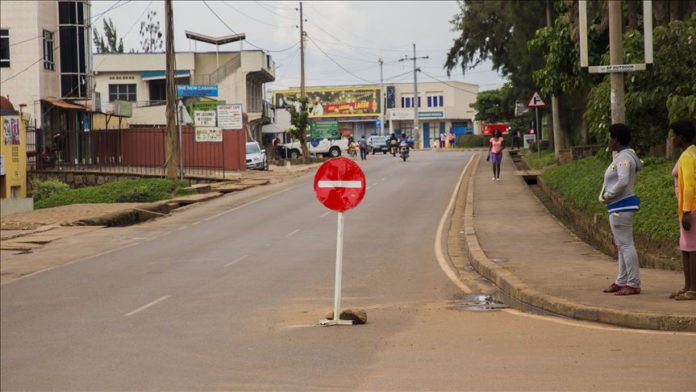 Rwanda announced Thursday that it will allow some people to return to work from May 4, easing a nationwide lockdown to combat the novel coronavirus in an effort to revive the economy.

“Public and private businesses will resume work with essential staff while other employees continue working from home. The manufacturing and construction sectors will open with essential workers,” said a communiqué issued by Prime Minister Edouard Ngirente after a cabinet meeting.

“Markets will open for essential vendors not exceeding 50% of registered traders. Hotels and restaurants will open and close by 7 p.m., but meetings in public spaces and mass gatherings are prohibited,” it said.

The partial steps were announced on the same day the country’s central bank said the global economic disruptions caused by the pandemic are weighing on Rwanda’s economy.

The outbreak of COVID-19 in mid-March has led to a significant slowdown in the economy, mainly in the services and industrial sectors, the central bank said.

The government has projected economic growth for this year at around 3.5% compared with an annual average of 8%.

With the number of registered COVID-19 cases at 243, the government said the newly announced measures will be reviewed after 15 days.

Under the new guidelines, the government announced a curfew from 8 p.m. to 5 a.m.

Borders will also remain closed except for cargo as well as returning Rwandans and legal citizens, who will be subject to a mandatory 14-day quarantine.

The new guidelines restrict funeral gatherings to not more than 30 people, while public and private transport between different provinces and the city of Kigali is not permitted.

Schools will remain closed until September as well as places of worship, bars and recreation centers.

The statement stressed that wearing face masks in public is mandatory at all times and mass screening and testing for COVID-19 will continue nationwide.

Rwanda announced an initial two-week lockdown on March 21 at the onset of the coronavirus outbreak, which was extended twice until April 30.

Matshidiso Moeti, the World Health Organization’s regional director for Africa, called on African countries Thursday to ensure that COVID-19 restrictions are gradually eased to avert new infections on the continent.

Global coronavirus fatalities exceeded the 230,000 mark Thursday while the number of cases reached 3,247,648, according to a running tally by US-based Johns Hopkins University.

Overall, the virus has spread to 187 countries and regions since emerging in Wuhan, China in December.