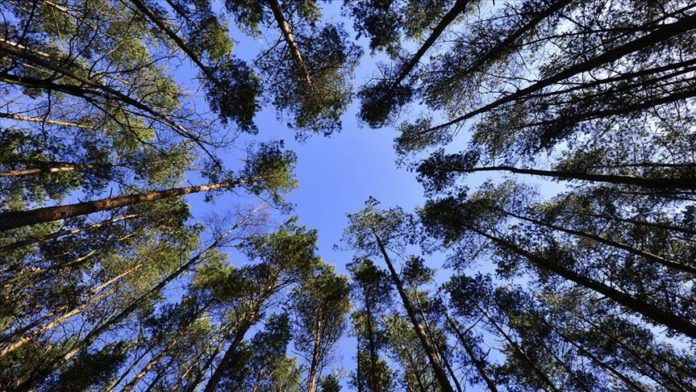 Under this restoration drive, authorities are planning to plant 8 million trees.

“The tree seedlings to be planted are all produced locally within the established tree nurseries in the project intervention zones. Around 700,000 trees are being planted every month,” he said.

Supported by the Global Environment Facility and the UN Development Program, the officials said the project will improve the livelihoods of local communities, increase agricultural productivity and food security.

The government drive of reforestation has also given a flip to the businesses of local nursery owners like Michel Munyemana, 45, who grows seedlings of different tree species in the Gasabo district in Rwanda’s capital Kigali.

Working on the roadside and selling plants to the passerby, Munyemana said the deforestation of his native district Bugesera some decades ago led him to the profession of growing saplings.

“Bugesera was largely stripped off from trees for firewood and charcoal. I started tree planting to earn some money to survive. But now I derive great satisfaction from growing trees,” he said.

“One at a time we can restore trees that people have damaged. Even when one dies a tree is one thing a person leaves for posterity,” he added.

Rwandan officials say the reforestation will help more than 360,000 people mostly women directly. They further said that it will restore green cover in at least 263,000 hectares of land also help in the refurbishment of another 263,000 hectares, to make it fit for agricultural activity.

Nkurunziza pointed out that unlike many other countries, locally grown species have been used for improving green cover to ensure suitability and adaptability.

Other green projects like the Landscape Approach to Forest Restoration and Conservation are also underway in four districts of Rutsiro, Rubavu, Nyabihu and Ngororero in western Rwanda and the Green Gicumbi in Gicumbi district.

But according to Rwanda’s Environment Minister, Jeanne d’Arc Mujawamariya, the Amayaga Project is a scaled-up project, part of efforts to invest in nature-based solutions.

“When it comes to adapting to the warming of our planet, Mother Nature is our best ally. Restoring forests and landscapes will not only benefit our environment but also improve the health and livelihoods of Rwandans and create green jobs. We are looking forward to seeing the Amayaga region green once again,” she said.

While local officials have been assigned to monitor planted trees, daily farmers are also trained to manage trees, said Nkurunziza.

“Awareness campaigns towards the management of planted trees have started and we will continue to raise awareness among different stakeholders to ensure the [trees] survival and sustainability,” he added.

After losing its huge green cover during the encroachment, Rwanda now has more than 30% of forest cover due to different green initiatives launched over the years, according to official data.

The government expects to avoid the emission of 4.7 million tons of greenhouse gases over the next five years because of the reforestation drive. According to a recent study, published in the journal Science, mature trees grown in an area of 0.9 billion hectares (2.2 billion acres) absorb 205 gigatons of carbon.