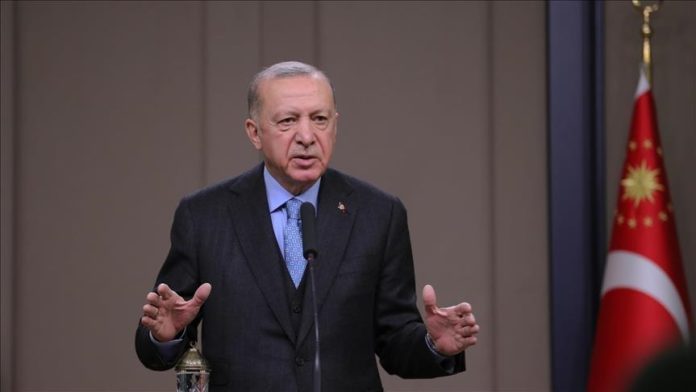 Speaking from Africa during a three-nation tour, Recep Tayyip Erdogan also called on the parties in the Ukraine crisis to abide by common sense and international law in the wake of Russia’s latest moves, including sending troops to eastern Ukraine.

“From the very beginning we’ve made a sincere effort to ease the tension in this crisis. We’ve clearly put forward our messages regarding resolution of the crisis,” he said.

On the potential impact of Ukraine-Russia tension on the Black sea region and Turkiye, Erdogan said as Turkiye is a Black Sea country – like Ukraine – many measures will be needed, and Turkiye has already taken a number of them.

“Turkiye cannot ignore the responsibilities of being a Black Sea country,” he said.

Also, to help resolve the situation, Turkiye is also ready to take part in a joint summit of the UN Security Council along with Germany, as proposed by Ukraine, if the other countries agree, Erdogan added.

On a visit to Turkiye by Israel’s president expected next month, Erdogan said: “We place importance on Isaac Herzog’s visit to Turkiye, which could lead to developments in other areas.”

The visit is seen as a sign of a possible thaw in Turkish-Israeli relations.

“We hope that taking this step between Turkiye and Israel will strengthen our relations so we can transform the region into a future-oriented place of peace,” he said.

He added: “We wish to continue our positive dialogue and to advance our relations with concrete steps in the coming days.”

In a speech late Monday, Putin announced the recognition of the separatist regions of Luhansk and Donetsk, also attacking Ukraine’s government and accusing the West of ignoring Moscow’s core security concerns.

Later, he ordered the deployment of Russian troops to “maintain peace” in the breakaway regions.

Putin’s moves have been widely condemned as serious violations of international law, and Western countries have vowed harsh new sanctions.

The US and its European allies have said Russia is setting the stage to invade Ukraine with a buildup of over 100,000 troops and heavy equipment in and around its neighbor.

Russia has denied that it is preparing to invade and instead accuses Western countries of undermining its security through NATO’s expansion toward its borders.

In 2014, Moscow began supporting separatist forces in eastern Ukraine against the central government. The conflict has taken more than 13,000 lives, according to the UN.