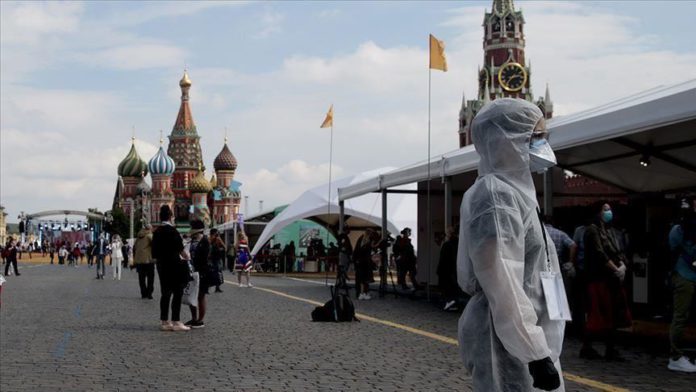 Daily coronavirus cases in Russia remained above 6,000 for the 12th consecutive day, authorities said on Tuesday.

The emergency task force reported another 6,368 infections, raising the number of COVID-19 cases registered in Russia to 694,230.

Active cases stand at 219,856, including 2,300 severe cases with patients in critical condition.

Recoveries increased to 463,880 as 9,551 patients were discharged from hospitals over the past 24 hours.

At least 198 people died over the same period, bringing the country’s death toll to 10,494.

Russia continues widespread testing to identify new cases and detect how many people have developed antibodies after being exposed to the virus.

A first group of volunteers is also expected to finish clinical trials for one of several COVID-19 vaccines being tested in Russia on July 15.

In June, most lockdown measures were eased throughout the country, including the capital Moscow, while the Federal Air Transport Agency extended the ban on international flights until Aug.1.

Russia has seen two epidemiological processes, the first being in Moscow and the second in the country’s other regions.

Moscow, which faced the virus outbreak first, has passed its viral peak, while the rest of Russia has yet to.

Across the world, the COVID-19 pandemic has claimed over 538,000 lives in 188 countries and regions since emerging in China last December.

More than 11.62 million cases have been reported worldwide, with the US, Brazil, India, and Russia currently the worst-hit countries, according to figures compiled by the US’ Johns Hopkins University.

The data shows more than 50% of all patients worldwide – over 6.3 million – have recovered so far.