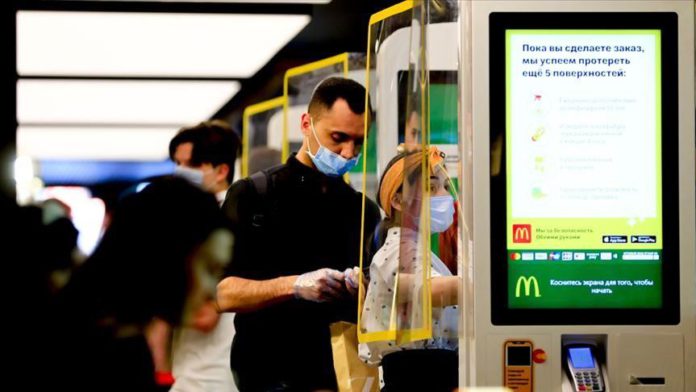 With 7,176 new coronavirus cases registered in Russia over the last 24 hours, the country’s total infections hit 606,881 on Wednesday.

Over the same period, 12,393 COVID-19 recoveries were recorded, taking the tally to 368,822, the Russian emergency task force said in a daily report.

Several Russian regions, including Nenets Autonomous Okrug, have not reported new cases for more than a week.

In his address to the nation on Tuesday, Russian President Vladimir Putin said the country managed to make the outbreak “recede” and “reach a turning point”. But he also warned the citizens “to remain focused, careful, and alert, especially until the mass production of an effective preventive medicine begins”.

Putin stressed that the coronavirus figures are still high in a number of Russian regions, including Tyva, Karachay-Cherkessia, the Yamalo-Nenets, and Khanty-Mansi autonomous areas.

Russia uses testing as one of the preventive measures, the president said, claiming that Russia is carrying out more tests per 1,000 patients compared to the world’s other major countries.

“The total number of tests exceeds 17 million, such a large number of tests helping identify the disease at its early stages even if it is symptom-free, which means breaking the infection chain and preventing it from spreading. This saves our people’s lives,” he added.

Currently, 14 Russian federal scientific centres are working on a vaccine against the virus, Putin said, adding that clinical tests of the first samples have already begun, and despite “an understandable impatience” the scientists are led by the medical principle of “do no harm”.

There must be “100% confidence” that the vaccine is effective, reliable and safe for people of all ages and in all states of health, Putin noted.

Since originating in China last December, the pandemic has claimed over 477,600 lives in 188 countries and regions.

More than 9.26 million cases have been reported worldwide, while over 4.63 million patients have recovered so far, according to figures compiled by the US’ Johns Hopkins University.

Rebels blamed for death of African migrants in Sanaa

Uganda parliament to close for 2 weeks amid COVID-19 surge