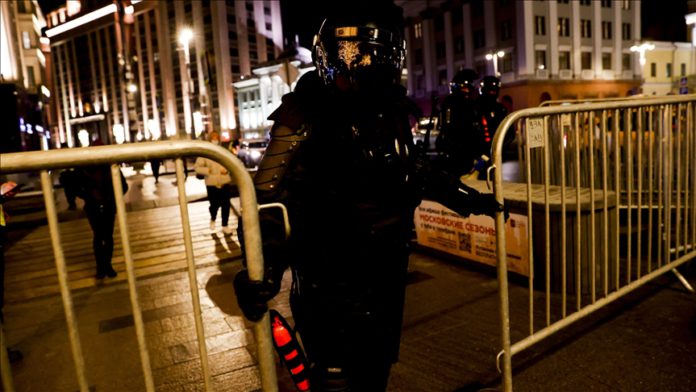 Supporters of Russian opposition politician Alexey Navalny took to the streets of the capital Tuesday after he was sentenced to three and a half years in prison.

Following the verdict, a call for demonstrations was made via social media to supporters of Navalny

The police intervened harshly against the groups, which called on the city’s residents to take to the streets, chanting slogans against President Vladimir Putin. Many of the demonstrators were detained.

In St. Petersburg, Russia’s second largest city, people also took to the streets to protest following the verdict against Navalny, but police detained dozens of demonstrators and dispersed others.

In the court, Navalny pleaded not guilty and demanded his immediate release. His lawyers, Vadim Kobzev and Olga Mikhaylova, said they would appeal the conviction.

In 2014, Navalny was convicted of fraud and embezzlement, but his sentence was suspended and replaced with six years of probation. He was obliged to report to the police twice a month.

After his alleged poisoning with a nerve agent last year, however, the requirement to appear before the police was put on hold for the duration of his treatment in Germany.​​​​​​​

Since he was discharged, the relaxation ended in September 2020. But according to the Russian Federal Penitentiary Service, he did not provide any objective reasoning for his non-appearance and was thus put on a wanted list.

Upon his return to Russia on Jan. 17, Navalny was arrested at the airport, which triggered mass protests throughout Russia. According to rights activists, over 5,000 people were detained on Jan. 31.