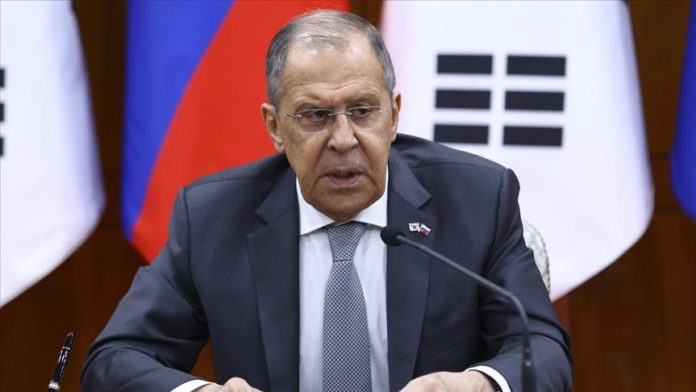 Russian-Turkish relations are very rich, both in terms of contacts at the highest level and their substantive agenda, Russian Foreign Minister Sergey Lavrov said on Wednesday.

Speaking at a meeting of the Moscow-based think tank Valdai Discussion Club, Lavrov said the two countries are able to bring out solutions, even on issues on which the parties have almost opposite views.

Sometimes, the agreements are implemented slower than expected. However, Turkey does not give up undertaken responsibilities, he said.

“In principle, Russian-Turkish relations are very rich … sometimes the positions differ quite seriously, but we value our relations because we can always find solutions with our Turkish colleagues that suit both sides,” the minister said.

Citing the situation in Idlib as an example he said the Turkish side “meets all its obligations,” including the separation of the armed opposition in the Idlib de-escalation zone and liberation of the M4 highway.

Lavrov said the US presence in Syria is illegal, and Washington encourages separatism in the country by funding “certain Kurdish organizations,” some of which do not hide their ties with the PKK terror group.

“The US exploits the hydrocarbons and grain that is produced in Syria. They sell and pay for the separatist actions of some Kurdish organizations at this expense, and block dialogue between Kurds and Damascus,” he said.

He also accused the US of using the Daesh/ISIS terror group to hinder settlement in Syria.

“ISIS [Daesh], let’s not forget, was created by the US when they committed aggression against Iraq, and there they did such things that a huge number of countries still deal with. ISIS was created after the Ba’ath party, all security forces were dispersed.

“Subsequently, ISIS was actively used, and continues to be used, by the US to hinder the processes that will lead to a settlement in Syria with the full participation of the current government,” he said.

Lavrov warned that the failure to settle the Syrian crisis could lead to Syria’s dissolution and further problems, one of them being “the Kurdish issue,” which will “immediately reach a regional scale.”

The Russian top diplomat said NATO refuses to discuss military confidence-building measures, including the proposal to withdraw exercises from the line of contact to an agreed distance.

The only thing the alliance wants to discuss under NATO-Russia Council is the situation in Ukraine, although the alliance has nothing to do with the Eastern European country, the minister added.

“[NATO chief Jens] Stoltenberg says that Russia refuses to work in the NATO-Russia Council. We don’t refuse to work, we just don’t want to sit there and listen about Ukraine. NATO has nothing to do with Ukraine, and they always insist that Ukraine should be the first issue when they propose to convene a NATO-Russia Council. We sat down a couple of times, listened, we [already] know all of it,” he said.

For its part, Russia suggested restoration of contacts, but NATO refused, the minister argued.

He called on the Organization for Security and Co-operation (OSCE) to play a more active role in Russia-NATO relations, saying that the OSCE’s task was to ensure security in Europe, and a confrontation between Russia and NATO creates risks.

– Iran refrains from talks on Afghanistan to avoid contacts with US

He said everyone expected the US-Taliban deal to put an end to bloodshed, but that Washington seemed to expand its presence in Afghanistan.

“There are a lot of efforts, a lot of formats, and it seems clear what to do, but every time there is some situation that either undermines the efforts made or greatly slows them down,” he said.

Explaining Iran’s indisposition to take part in talks on Afghanistan, Lavrov said Tehran was not ready to sit at one table with the US.

“We invited Iran to join the troika plus [Russian, China, the US, and Pakistan] format on Afghanistan, but the Iranian colleagues said it would be inappropriate taking into account the situation around the nuclear deal,” he said.