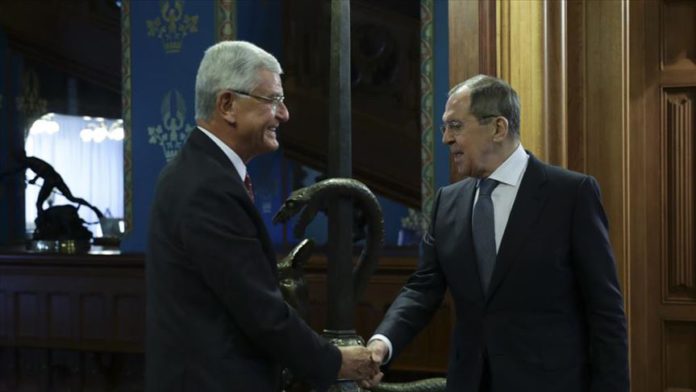 A meeting between Russia’s foreign minister and the UN General Assembly president began on Thursday in Moscow.

“In addition, given that Mr. Lavrov was the head of the Permanent Mission of the Russian Federation to the UN for ten years, of course we would like to take advantage of his experience and listen to his valuable advice,” said Bozkir.

The former Turkish diplomat said the UN General Assembly is “one of the three fundamental structures of the UN,” along with the Security Council and the office of the General Secretariat, stressing the need to ensure strong coordination and close connection among the three bodies.

“Here, I would like to note that the UN authority and effectiveness have been declining in the eyes of the international community in recent years,” he said.

Noting that it had become increasingly difficult under the novel coronavirus pandemic to implement the decisions of the General Assembly, Bozkir suggested to work together with Moscow towards this goal.

For his part, Lavrov congratulated Bozkir on his recent election to his post, underlining his confidence in the former Turkish diplomat’s “vast experience of parliamentary diplomacy,” and his will to pursue “a balanced, unbiased line” to help temper tensions and find solutions acceptable to all members of the international community.

“This demands from all of us to build the work of the General Assembly around a unifying agenda with an emphasis on strengthening the central coordinating role of the UN, strictly observing its charter, and establishing a true multipolarity that is based on taking into account and balancing the interests of all members of the world community without exception,” he said.

Lavrov criticized alleged attempts to exert undue influence on administrative bodies of the international organizations and to misinterpret international conventions.

“You are assuming the post of General Assembly President at a very important time. We are well aware of all the difficulties that the international situation and the world order are currently experiencing. I assure you that in Russia you will find the most reliable and consistent ally in defending the original goals and principles on which the UN is based,” Lavrov said.

Nigeria urges Ethiopians to unite against instability after poll