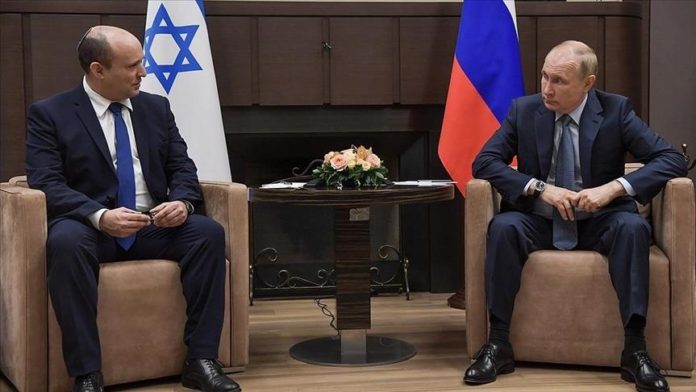 Russian President Vladimir Putin had a phone conversation with Israeli Prime Minister Naftali Bennett at the initiative of the latter, the Kremlin said Monday.

“The leaders continued the exchange of views on the special operation to defend the republics in Donbass. In this context, Vladimir Putin pointed out the latest barbarous action of the Ukrainian military – today’s missile attack at Donetsk central part. The missile had a cluster munition, which resulted in numerous civilian casualties,” it said in a statement.

Putin also told the Israeli premier about his assessments of the negotiations between Russian and Ukrainian representatives, which are being held these days via videoconference.

Bennett, who has been making active efforts aimed at achieving a peaceful resolution of the Russia-Ukraine war, which started on Feb. 24, told Putin about his recent contacts on Ukrainian issues with the leaders of a number of states.

The Russia-Ukraine war has drawn international condemnation, led to financial sanctions on Moscow and spurred an exodus of global firms from Russia.

At least 636 civilians have been killed and 1,125 injured in Ukraine since the beginning of the war, according to the UN. It has warned, however, that the true toll is likely much higher as it has not been able to gain access to areas of increased hostilities.

Trump says US halting funding to WHO amid pandemic